Fintan O’Toole: DUP has done the most for a united Ireland 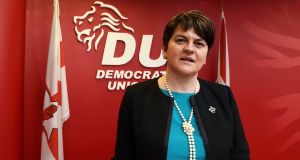 Whatever else can be said about the Democratic Unionist Party, it can surely be absolved of some of the most serious charges routinely laid against it.

The DUP is not hostile to the legitimate aspirations of Irish nationalists and it is not wedded to sectarian stereotypes.

In fact, it has an extraordinarily positive record in both areas. The fact that this record is entirely accidental is no reason to be churlish.

In the first instance, the DUP has achieved more progress towards a united Ireland than any Irish political party, North or South, since partition in 1921.

Before it embarked on its Brexit spree, Northern Ireland was becoming a surprisingly stable political entity.

For the first time in its history, the Catholic minority had been largely integrated into its political structures.

The Belfast Agreement had created a settlement that protected unionism, in the medium term at least, from demographic change.

In December 2012, when census results showed that for the first time the Protestant population in Northern Ireland had fallen below 50 per cent, this might have been an epochal moment. But it wasn’t really.

The institutions were largely working and, for all the rhetoric, there was little appetite on either side of the Border for a radical alteration of the constitutional arrangements.

Those census figures showed something else: that Northern Ireland had become, as Steven McCaffery of The Detail put it, “a community of minorities”.

It had evolved to have not the two strands of historical lore, but at least three.

The census found that 38 per cent regard themselves as British, 25 per cent as Irish and 20 per cent as Northern Irish.

It also found that while 41 per cent identified themselves as Protestant and 40 per cent as Catholic, a striking 17 per cent declined to categorise themselves as either.

This diversity was the greatest long-term protection that unionists could have.

It guaranteed that there could be no majoritarian tribal victory for either side.

The real Northern Ireland was a place of multiple identities and any future political settlement would have to reflect this complexity.

And then the DUP went to the big Brexit roulette and put all its chips on red, white and blue.

The only way to acquit the party on the charge of idiocy is to find it guilty of an enormous bluff.

It thought it could indulge itself in some ultra-British flag-waving but with no real-world consequences.

It would back Brexit and be secretly delighted when it lost.

The gambit was especially reckless for a party for whom the union is its whole raison d’être.

The English nationalists who drove Brexit don’t really care about the union – under the rhetorical covers, they will ditch Northern Ireland and Scotland if need be.

It has thus done more to advance a united Ireland than the Provisional IRA managed in 30 years of mayhem.

However loyally British you may be, you will have to show her majesty’s passport when you land in Stranraer from Larne or in London from Belfast – but not when you drive from Newry to Dundalk.

In the longer term, the Northern Irish identity to which 20 per cent of the population adheres and from which unionism could draw its greatest comfort will be profoundly undermined because it was predicated on Northern Ireland being in the European Union.

The EU underpinned the willingness of much of the population to settle down within the current borders for the foreseeable future.

It is breathtakingly self-destructive for unionism to withdraw that certainty.

And that’s even before we consider how those who regarded themselves as British will feel when they go to London looking for English nationalists to make up the €7,533 million in direct investment from the EU into Northern Ireland since 1988 and the 87 per cent of farm incomes that come from EU subsidies.

One can but wish them the best of British luck.

As for sectarian stereotypes, it should be acknowledged that the DUP in its period in government has done more to demolish them than we puny pluralists have ever managed.

The stereotype was that Catholics were dodgy and sleazy while Protestants were straight and upright. The DUP selflessly took upon itself the task of reversing these cliches.

In the Iris Robinson affair, in the handling of Nama’s Project Eagle property deal and in the cash-for-ash scandal, it has ensured that nobody can ever again trot out the notion that Catholics bend rules while Protestants respect them without being blown over by gusts of laughter.

There used to be talk that Fianna Fáil would establish a northern branch – who knew that it would be the DUP?

Ordinarily, a party with such epic achievements would deserve to be rewarded with a continuation in power. But in the case of the DUP, it is hard to imagine what more it could achieve in these areas. Its work is done.

1 Coronavirus: Irish citizens advised not to travel to Italy’s affected areas
2 Divisive Leitrim rape case raises questions about future trials
3 Bank leaked my loan request to family who tried to rip me off
4 Why Sinn Féin will not call the State by its name
5 Varadkar says Sinn Féin rallies a ‘campaign of intimidation and bullying’
Real news has value SUBSCRIBE