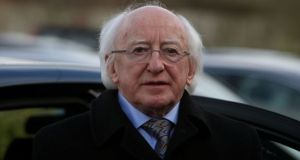 ’The banking sector has to come to the table with an instrument that can deal with those who are having short term liquidity (problems),’ the President has said. Photograph: Brian Lawless/PA

President Michael D Higgins has said banks in Ireland are the “big gap” in a collective national effort to survive the coronavirus crisis.

During a “great promising moment” in which the country was coming together to transform for the better key ways in which we live, the banking sector is “missing”, the President said.

Speaking on the Late Late Show, Mr Higgins referred to a recent report by business representative group Ibec, which warned smaller businesses in Ireland struggling to get through the lockdown only have cash reserves to last them around three months.

It would will take around 10 months for them to get to “anything like recovering” from the collapse in trade during the government-ordered shutdown of the economy, he suggested.

“That means, really, that in the partnership that will be necessary after Covid - there will be the business sector, the unions, the workers, and so on – but really those who are responsible for liquidity will have to step up,” he said.

The issue of cash flow for smaller businesses – which he described as a “very significant part of the economy in terms of employment” – must “be dealt with”, he added.

“That means the banking sector has to come to the table with an instrument that can deal with those who are having short term liquidity (problems),” the President said.

“But equally what we have to do, very much, is we have to get the credit flow to the business sector…”

Mr Higgins added: “I must say, I wish all those people who have reconstructed the banking system well, but I do identify it as a big gap. I see them as missing…”

Speaking on the banking bailout in the Dáil in 2008 while a Labour TD for Galway West, Mr Higgins excoriated the “extraordinary arrogance” of the Irish banking sector.

The economic crash at the time exposed that the banking model was “wrong” and had “brought the world to its knees”, he said at the time, adding that the Irish people had no interest in bailing out the banks “for more of the same.”

Earlier this week, banking industry representatives Banking and Payments Federation Ireland (BPFI), said a total of 140,000 mortgage, personal and business loans had been granted a three month pause on repayments as a result of the Covid-19 crisis.

Brian Hayes, chief executive of BPFI, said a June 30th deadline for applications for repayment breaks will not be extended.

Those who miss the deadline to have their application processed would “fall into another category”, he said, citing a framework from the European Banking Authority (EBA) which “must be done and dusted effectively” by the deadline it has set.

Mr Hayes was not immediately available for response to Mr Higgins’ remarks.