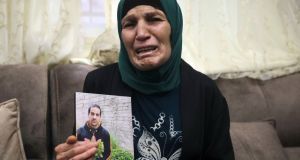 Israeli police officers fatally shot a Palestinian they suspected was carrying a weapon in Jerusalem’s old city on Saturday, a police spokesman said, but the man was later found to have been unarmed, Israeli media reported.

“Police units on patrol there spotted a suspect with a suspicious object that looked like a pistol. They called upon him to stop and began to chase after him on foot, during the chase officers also opened fire at the suspect,” police spokesman Micky Rosenfeld said.

Mr Rosenfeld said the suspect, a Palestinian resident of east Jerusalem, was dead.

Police did not say whether the man had been carrying a weapon and a gag order was placed on the investigation. Israel’s Channel 13 News said that he was found to be unarmed.

“Israeli Occupation Forces in East #Jerusalem assassinated Iyad Khayri, 32 a disabled Palestinian. A crime that will be met with impunity unless the world stops treating Israel as a state above the law &@IntlCrimCourt fulfils its mandate.”

Israeli public security minister Amir Ohana expressed sorrow on Twitter for the man’s death and said the investigation’s findings will be studied to prevent such incidents in future.

Tension has risen in recent weeks with Israel saying it hopes to move ahead with a plan to extend sovereignty to Jewish settlements and the Jordan Valley in the occupied West Bank – a de-facto annexation of land the Palestinians seek for a state.

The Palestinians, Arab states, the United Nations and European states have warned against the move and the Palestinians have declared an end to security cooperation with Israel and its ally, the United States, in protest. – Reuters