The NRA speaks first and loudest on its online TV channel

Colion Noir, an 'urban gun enthusiast' and presenter on NRATV claims that the media love mass shootings. NRATV is the online channel of the National Rifle Association. Video: NRATV 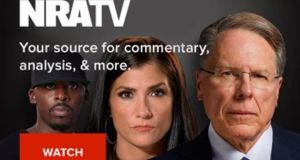 NRATV: Few news media operations seem as in sync with the political sensibilities of the Trump era.

Whenever there is a mass shooting in the US, the National Rifle Association has a well-rehearsed response: say very little until the inevitable discussion about gun control cools down. But as the leaders of America’s most influential gun advocacy group kept quiet after the school shooting last week in Parkland, Florida, that claimed 17 lives, a furious debate played out on NRATV, the organisation’s online video channel.

Its hosts spoke chillingly of leftist plots to confiscate weapons, media conspiracies to brainwash Americans into supporting gun control and a “deep state” campaign to undermine President Donald Trump. “Coastal, socialist media elites hate guns so much,” said one of the hosts, Grant Stinchfield, a Second Amendment activist based in Dallas and a radio commentator, that they would take everyone’s away, “leaving only criminals, of course, with the firepower – and all of us at the mercy of evil”.

Critics of the NRA say that they have observed a shift in the organisation’s tone since Trump was elected that is much more pugilistic, and that NRATV is where the most outrageous commentary occurs. This change, they say, seems to reflect the fact that like many organisations on the right, the NRA believes it has to guard against complacency among its members with a friendly president in the White House.

“There’s no bogeyman in the White House now to make people afraid of,” said Shannon Watts, the founder of Moms Demand Action, a gun control advocacy group. “So they have to make us afraid of one another, and that is how they will market guns in an age when they have a president beholden to them.”

The channel has become a little-noticed but vital forum for the dissemination of some of the most strident pro-gun messaging in politics today, with hosts and guests who are closely allied with Trump. Few news media operations seem as in sync with the political sensibilities of the Trump era.

They attack the enemies he attacks, condemning the news media as “dishonest” and “failing”. They have questioned the credibility of the FBI, whose failure to act on tips about the suspect in the Florida shooting has intensified criticism from conservatives seeking to discredit the bureau – this week, Dana Loesch, an NRA spokeswoman, encouraged mass demonstrations outside FBI offices.

And they often side with Trump in divisive cultural disputes – some of which have potent racial undercurrents – like his feuding with Black Lives Matter activists and the professional football players who knelt during the national anthem.

With broadcast television-quality production and three dozen original series, NRATV has the ability to reach millions of people through the channels that distribute it like Apple TV, Roku and Amazon Fire TV. And it has significant resources at its disposal as part of the NRA’s far-reaching “membership support” programme. In recent years, that operation alone spent $35.5 million (€29 million), according to its most recent publicly available tax filing.

But it is just the newest piece of a larger news media operation inside the NRA that receives little attention compared with the group’s political and lobbying activity. The organisation produces at least seven print and online magazines that have a combined circulation of more than 11 million, according to the NRA.

Andrew Arulanandam, a spokesman for the NRA, declined to discuss the media effort, the size of its online audience or its programming in the wake of the Parkland shooting. As a matter of policy, he said, the NRA does not discuss proprietary matters.

NRATV is a budding business for the organisation, which has brokered sponsorship arrangements with gun-makers like Kimber, Mossberg and Ruger to feature their firearms on its programmes. Its series cover a range of topics and interests intended to appeal to gun owners of all kinds, like Armed and Fabulous, which profiles rifle-slinging women; Frontlines, a news magazine hosted by Oliver North (best known for his role in the Iran–Contra affair in the 1980s); and Under Wild Skies, which follows hunters in pursuit of big-game trophies.

But politics and provocation are NRATV’s speciality. It has singled out news outlets and attacked individual journalists like Don Lemon of CNN, who was targeted in an ad that accused the anchor and his network of smearing Trump and colluding with Hillary Clinton’s presidential campaign. In one video released this month, Loesch, a former Tea Party activist and Breitbart editor, pretended she was about to burn a copy of the New York Times.

Stories that circulate throughout right-wing news media often find their way to NRATV, which has devoted numerous segments to portraying anti-Trump demonstrators as paid shills, violent extremists and evangelists for Sharia law in the United States.

Its guests and hosts are not shy of trading in racially charged language and imagery. A promo for a programme called Noir featuring a Navy SEAL member named Dom Raso opens with a dramatisation of a foiled robbery. A black man wielding a knife grabs and forces a white woman to the ground as an armed bystander reaches for his handgun and rushes to her defence.

After Trump’s inauguration last year, an NRATV correspondent, Chuck Holton, tweeted that it was time to “get busy scrubbing Obama’s mocacchino stain off of America!” – an apparent reference to the colour of President Barack Obama’s skin.

The NRA’s practice is to keep a low profile after mass shootings, as it did after the massacres in Newtown, Connecticut, and at the Pulse nightclub in Orlando, Florida. But it was always quietly talking to its members, first by email and later on NRATV, said Danny Barefoot, a partner at Anvil Strategies, an ad agency and communications company that has worked with gun control groups.

“In those moments, the goal isn’t to disseminate mass information and persuade a lot of people,” Barefoot said. “The strategy is to be a messenger to the NRA’s own people.”

‘Part of a community’

Eli Pariser, co-founder of Upworthy, a site that delivered progressive political videos to targeted audiences on Facebook, said that while videos produced by NRATV after a shooting might not go viral, they helped viewers “feel they’re part of a community, led by a news source that speaks to them”.

NRATV can galvanise members in the wake of a shooting in part because the NRA has coached its followers to believe that the organisation is the only credible source for news and information on any gun issue or controversy.

NRATV’s slogan – “America’s Most Patriotic Team on a Mission to Take Back The Truth” – reinforces a sense of mistrust in traditional news media, as do its hosts. In the days after the Parkland shooting, Stinchfield and Loesch, two of the channel’s most prominent faces, were relentless in their attacks on the news media.

“If it can topple us, it gets a direct path to the Second Amendment,” Stinchfield told viewers this week from the organisation’s studio in Dallas. “They will stop at nothing to put us out of business.” – New York Times