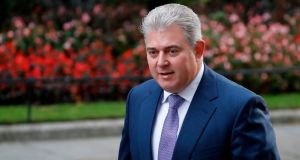 Secretary of State for Northern Ireland said the government was determined that businesses should be able to trade freely in and with Northern Ireland. Photograph: Getty

The British government will press ahead with a plan to introduce a second Bill giving ministers the power to override the Brexit withdrawal agreement, Northern Ireland secretary Brandon Lewis has told MPs.

The UK Internal Market Bill, which passed all its stages in the House of Commons on Tuesday, allows ministers to circumvent the Northern Ireland protocol’s measures on state aid and the requirement for export declarations to accompany goods moving from Northern Ireland to Great Britain.

Further powers to determine which goods moving from Great Britain to Northern Ireland are at risk of proceeding into the EU single market were due to be included in the finance Bill following this year’s autumn budget. Chancellor Rishi Sunak has cancelled the budget but Mr Lewis said the government would bring forward legislation none the less.

“The protocol makes it clear that there will be some changes for goods movements into Northern Ireland from Great Britain. We are consulting businesses in Northern Ireland and working with our partners in the European Union to deliver on that, and there will be a slimmed-down finance Bill that includes all the commitments we have made to the people of Northern Ireland that are outstanding at that point,” he told the House of Commons.

In response to a question from the DUP’s leader at Westminster Jeffrey Donaldson, Mr Lewis said the government was determined that businesses should be able to trade freely in and with Northern Ireland.

“We will make full use of the provisions in the protocol to deliver on that, and we will continue to discuss this with the European Union,” he said. “There are still issues that we are discussing as part of the free trade agreement and through the specialist joint committee, but we will ensure that all the commitments made by myself, the prime minister and other colleagues at the dispatch box are delivered through a slimmed-down finance Bill later this year.”

What changes for EU fishermen?

British and EU negotiators entered their ninth round of talks in Brussels this week amid reports that Britain has offered a three-year transition period for European fishermen operating in UK waters. Under the British proposal, quotas and access for EU boats would be reduced year by year and would be negotiated annually.

“Getting a sub-optimal deal on fishing would constitute failure to deliver on promises made to the industry and would perpetuate the deeply unfair arrangements under EU membership, where others have benefited hugely from the UK’s natural resources, to the UK’s very significant disadvantage,” she said.

“We have never been in a stronger position than we are now, but anything given away now will never be regained. SFF urges you to remain firm on fishing, and not to concede our precious natural resources and our sovereignty.”