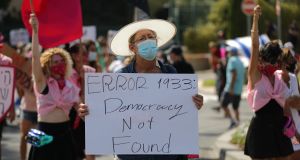 Anti-Netanyahu protesters demonstrate outside of the Knesset in Jerusalem on Tuesday. Photograph: Abir Sultan/EPA

Israel’s Knesset parliament has voted to restrict the right to demonstrate during the coronavirus state of emergency.

Citizens will only be permitted to demonstrate within 1km of their homes and in pods consisting of up to 20 people.

The controversial move, unprecedented in peacetime Israel, will put an effective end to the weekly protests outside the Jerusalem residence of prime minister Binyamin Netanyahu. The gatherings had attracted thousands of protesters from all over the country calling on Mr Netanyahu to step down over corruption allegations and his handling of the coronavirus crisis, which has seen Israel emerge with one of the worst infection rates per capita in the world.

The restrictions will last for a week but may be extended for an additional 14 days with Knesset approval.

The ongoing mass protests had been cited by religious Israelis, who opposed the closing of synagogues as part of the lockdown. Mr Netanyahu had described the protests as “coronavirus incubators”.

Opposition leader Yair Lapid told the Knesset that democracy was in danger.

“It’s important for me to come here and to utilise every opportunity to speak in the plenum as long as you still permit me to do so, because that’s the next stage.”

Justice minister Avi Nissenkorn, from the centrist Blue and White coalition party, defended his party’s decision to vote in favour.

“We’re protecting the balance between the fight for public health and civil rights,” he argued. “Restrictions on movement for demonstrations will apply only during a full lockdown.”

Miki Haimovich was one of two Blue and White MKs who broke the party whip to vote against. “This is a test for everything that pertains to democracy, freedom of speech, individual freedom and freedom of movement,” she said.

The full lockdown was introduced on Sunday for a 16-day period but now looks likely to be extended indefinitely.

With the daily infection rates continuing to surge and 15 per cent of all tests returning positive, Mr Netanyahu warned that the lockdown could potentially last much longer than a month. He said that objectives and benchmarks would be set and that they would dictate for how long a period the lockdown would continue.

The ultra-Orthodox population account for about 12 per cent of Israel’s population but make up more than one-third of Covid-19 cases, according to health officials.

In order to preserve the religious way of life and maintain Torah study at all costs, some ultra-Orthodox leaders now believe it’s best for the community to be become infected with Covid-19 in an effort to achieve herd immunity.

The elderly and other high-risk groups have been ordered to protect themselves, while the younger members and yeshiva seminary students will continue to go about their lives as usual.