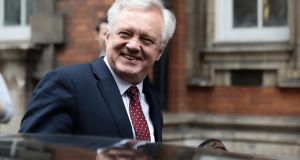 Brexit secretary David Davis has said that Britain could keep the same customs arrangements with the European Union for an interim period in order to avoid ‘unnecessary disruption’ for UK businesses. Photograph: Jonathan Brady/PA Wire

Britain expects to “mirror” much of the existing EU customs system both during and after Brexit, according to new UK government plans.

The plans, published on Tuesday, provide the first detailed look at the UK’s negotiating strategy and also reveal new reporting requirements for businesses as a way to minimise delays at international borders and avoid the need to build extra physical infrastructure.

The government has put forward two mechanisms: a process to track all goods and components, and a repayment mechanism - whereby importers pay whichever is higher of the EU or UK tariffs and claim a refund should the end destination be the one with lower tariffs.

“This is an innovative and untested approach that would take time to develop and implement,” the Brexit Department said, adding that it wants to “explore” the approach with businesses to understand the complexities involved.

The compromises are outlined in a long-awaited policy paper on future customs arrangements that promises “the freest and most frictionless system possible” via a complex series of modifications to the existing system.

“The approaches we are setting out today will benefit both the EU and UK and avoid a cliff-edge for businesses and individuals on both sides,” according to UK Brexit secretary David Davis.

“The way we approach the movement of goods across our border will be a critical building block for our independent trade policy,” he added.

“An interim period would mean businesses only need to adjust once to the new regime and would allow for a smooth and orderly transition.”

But explanatory briefings by British government officials revealed that the UK government’s intention is for this interim phase to involve a new, temporary, customs union with the EU that would be substantially the same as now.

Officials confirmed while this would technically involve leaving the existing EU customs union after March 2019, it would be close enough to existing arrangements that Britain would only be able to negotiate, rather than implement, new trade deals with third-party countries.

This contradicts confident promises made by trade secretary Liam Fox and the chancellor, Philip Hammond, in a joint article published on Sunday.

The article was heralded as a victory for the international trade secretary’s ambitions to show the benefits of an independent trade policy long before the next election.

“In March 2019 the United Kingdom will leave the customs union and be free to negotiate the best trade deals around the world as an independent, open, trading nation,” they wrote in the Sunday Telegraph.

“When we’ve left the customs union, we will build on these relationships by negotiating as an independent nation with the freedom to sign bilateral free trade agreements.”

Chaos at the ports

On Tuesday, UK civil service officials refused to say whether new deals could be signed during this interim phase, and stressed that implementation was impossible until after the UK moved to its final customs arrangement.

But even the two scenarios outlined by the government for this end state position could still involve substantial overlap with EU customs procedures to try to minimise chaos at the ports.

The second, and more ambitious, of two options outlined in Tuesday’s paper was called a “new customs partnership” and “would involve the UK mirroring the EU’s requirements for imports from the rest of the world where their final destination is the EU”.

Officials hope this would remove the need for all customs checks with the EU because UK exports would also be exempt from tariffs under the planned free trade agreement - though all such promises are subject to extensive negotiation with other member states.

The other option envisaged by the government after the interim stage would be a form of the current customs arrangements with countries outside the EU but rely heavily on new technology, such as number plate recognition, to try to avoid physical checks at the border.

Officials conceded that both these options would entail significant new red tape for business as they would entail shifting the reporting burden on to exporters at the point of departure rather than building new lorry parks and border posts.

Mr Fox struck a defiant note in a statement to accompany the new strategy paper, insisting “leaving the customs union will allow us to operate a fully independent trade policy in Britain’s national interest.”

“We will seek a new customs arrangement that ensures that trade between the UK and the EU remains as frictionless as possible and allows us to forge new trade relationships with out partners in Europe and around the world”.