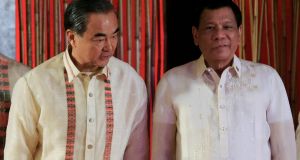 China will bear the main burden of enforcing sanctions against North Korea over its nuclear programme, foreign minister Wang Yi told an Asian security summit in Manila, while a scheduled meeting between Vietnam and China was cancelled over Beijing’s disputed territorial claims.

The ASEAN Regional Forum (ARF) in the Philippine capital discussed the gathering geopolitical storm in Asia, with the Korean nuclear crisis and Beijing’s maritime ambitions in the South China Sea dominating the gathering of Southeast Asian nations.

The sanctions prohibit countries from hiring more North Korean workers, ban new joint ventures with North Korea and any new investment in current joint ventures – areas in which China has traditionally been active.

“Owing to China’s traditional economic ties with North Korea, it will mainly be China paying the price for implementing the resolution,” Mr Wang said in a statement from the foreign ministry released on Tuesday.

China is the North’s only ally of significance and economic input from China in the form of fuel and food aid, as well as infrastructure investment, is crucial to keeping the North Korean economy viable.

“But in order to protect the international non-proliferation system and regional peace and stability, China will as before fully and strictly properly implement the entire contents of the relevant resolution,” said Mr Wang.

He called on Pyongyang “to calmly handle the resolutions” and warned North Korea against doing “anything unbeneficial towards the international community such as a nuclear test”.

The North Korean response was typically robust, threatening to teach the US “a severe lesson” if it sought to punish the North for its nuclear ambitions.

So far, efforts by US president Donald Trump’s administration to pressurise North Korea into abandoning its nuclear and missile ambitions have gained little traction. Pyongyang has in fact stepped up its tests, launching two intercontinental ballistic missiles last month.

North Korea blames the US and South Korea for ramping up tensions by conducting joint military drills.

A scheduled meeting on the sidelines of the summit between Mr Wang and his Vietnamese counterpart Pham Binh Minh was called off as Vietnam asked ASEAN foreign ministers to include in a communiqué its concerns about China’s militarisation of land in the South China Sea.

Philippine president Rodrigo Duterte, who has launched a slew of sweary tirades against the US in recent months, appeared to take a more conciliatory approach when he greeted secretary of state Rex Tillerson, saying he was a “humble friend” of America.

“I am happy to see you . . . and you have come at a time when the world is not so good, especially in the Korean peninsula, and of course, the ever nagging problem of South China Sea,” Mr Duterte told Mr Tillerson at the presidential palace.

“I know you’re worried there, because you also have domestic problems . . . We are friends. We are allies,” said Duterte. “I am your humble friend in southeast Asia.”

Mr Duterte’s relationship with Donald Trump’s predecessor Barack Obama was fractious because of Mr Obama’s strong criticism of the bloody anti-drugs crackdown in the Philippines, which is believed to have killed as many as 7,000 people since Mr Duterte took office.

Mr Trump has been full of praise for the crackdown, saying Mr Duterte was doing an “unbelievable job” and inviting him to the White House.