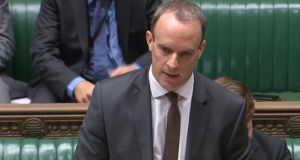 “We have made the point that we would never accept any proposals that would threaten the integrity of the United Kingdom, whether constitutional or economic. We have also made the point that a lot of the proposals that we have seen would not be acceptable to many on the EU side, given the separatist pressures in places such as Corsica, Catalonia and other parts of Europe, ” he said.

Mr Raab was responding to a question from Steve Baker, a Conservative Brexiteer who asked if he had been able to persuade his EU negotiating partners that Northern Ireland was not “some enclave of the character of those around the area of the Bodensee” but an integral part of the UK.

Formal negotiations between the UK and the EU have yet to resume after they broke down ahead of last week’s meeting of the European Council in Brussels. Mr Raab said the UK was committed to getting a deal that would deliver frictionless trade with the EU but said the backstop would be necessary if the deal was not in place by the end of 2020.

“We have committed ourselves to providing a backstop in case there is a gap between the end of the implementation period and the coming into effect of the future relationship, but we will do nothing to threaten – and will not accept anything that does threaten – the integrity of the United Kingdom,” he said.

Theresa May told MPs on Monday that she wants to replace the EU’s Northern Ireland-specific backstop in the withdrawal agreement with a UK-wide customs backstop. Mr Raab said such a backstop would serve as a bridge between the end of the transition period and the future relationship and must be temporary.

“That does need to be something we are not locked into indefinitely, and, of course, the EU side cannot agree anything under article 50 – which provides only for the winding-down of the EU arrangements – that would allow something to be indefinite, so this ought to be a matter that there is mutual interest in and agreement on resolving,” he said.

Mr Raab acknowledged that the government was making contingency plans to ship in emergency supplies in the event of a no-deal Brexit. And he warned that France could deliberately create delays at Calais if Britain leaves the EU without a deal.

“We also need to prepare for the worst-case scenario where the authorities at Calais are deliberately directing a go-slow approach by supporting a diversion of the flow to more amenable ports in other countries,” he said.

Conservative Philip Hollobone said that if France did behave as Mr Raab warned, Ireland would suffer more than Britain.