‘Infrastructure requirements arising from a hard Brexit are now real’ 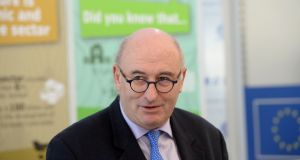 Ireland’s EU commissioner Phil Hogan has said the risk of a disorderly Brexit means new investment in major energy and other infrastructural projects thought to be ‘down the line’ may have to be accelerated. File photograph: Alan Betson

Government departments and State authorities “have to be planning ahead more intensively” to prepare for a possible no-deal Brexit, Ireland’s EU commissioner Phil Hogan has said.

Speaking at an [Association of European Journalists] event in Dublin, Mr Hogan said the Government had to consider risks to the “very important landbridge” getting Irish products to mainland Europe given how a hard Brexit might make the route “cumbersome” and introduce tariffs and an “administrative burden” for small companies.

“What are we doing to prepare ourselves to get directly to the continent through ports in France and in Rotterdam or Belgium?” he asked. The risk of a disorderly Brexit meant new investment in major energy and other infrastructural projects thought to be “down the line” may have to be accelerated, he said.

“These technical and infrastructure requirements arising from a hard Brexit are now real,” he said. Mr Hogan said the Commission would also have to “intensify” no-deal contingency planning given the political divisions in London over the draft Brexit agreement.

The EU had looked at relaxing state aids, introducing financial supports to protect against market disturbance and looked at plant and animal health standards to prevent disease in the transport of animals.

The Commission would consider the situation after the UK parliament voted on Tuesday “to consider a plan B, if there is a plan B”, said Mr Hogan, though he stressed there was no alternative to the deal on the EU side.

“If there is going to be a plan B, well then the ball is in the court of the United Kingdom to come up with a plan B,” he said. He declined to speculate on how UK MPs might vote on the draft agreement next week.

Concern over rise in Covid-19 cases in Louth, Donegal and Waterford 09:38
Man in his 40s dies after two-car crash on N7 in Dublin 09:24
Gardaí break up rave attended by 60 people at Dublin flat complex 08:51
Dublin restaurateurs praise ‘amazing’ support from customers 06:55
Cork City FC leads tributes to man who drowned near Youghal 06:39