Irish exporters have designs on Germany for growth

Many exporters are looking to Germany for opportunities amid Brexit uncertainty 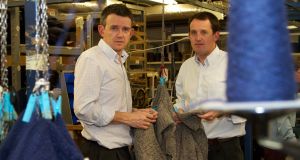 Paul and Brendan O’Sullivan, owners of Irish knitwear company Irelands Eye. In the past six years its business to Germany has quadrupled. Photograph: Lensmen Photographic Agency

Step into Ladage & Oelke, Hamburg’s leading upmarket men’s clothes shop since 1845, and the air is heavy with wood, leather, tradition and quality. Among the wax jackets and tweed are products from Irelands Eye Knitwear.

Celebrating its 30th anniversary this year, the company based in Baldoyle, on Dublin’s northside, says loyal German clients have been a key part of its success.

“Germans understand quality and prepared to pay for it,” says Paul O’Sullivan, managing director. “They understand something more expensive will last a long time, as opposed to fast fashion.”

Two decades ago, encouraged by Enterprise Ireland (EI), the Dublin knitwear company dipped its toe into the German market. On Friday, Irelands Eye and other EI client companies past and present gathered in Athlone to tell of their stories of entering the German market.

In the age of Brexit, the organisers say, the time has come for Irish businesses to move beyond talk and follow more than 500 Irish companies now exporting into one of Europe’s largest and most stable markets.

“Brexit has certainly accelerated the trend of Irish companies targeting and winning new business in Germany, ” says Eddie Goodwin, EI manager for Germany. “There has never been a more opportune time for Irish companies to take advantage of the massive market of the largest EU neighbour.”

Half of Irelands Eye Knitwear’s output is exported and 30 per cent of that goes to Germany. In the past six years, with two sales agents on the ground, Irelands Eye business to Germany has quadrupled to buyers including high-end independent stores and catalogue retailers.

“Enterprise Ireland was a huge help at the start, knocking on doors, but that will only get you so far,” says O’Sullivan.

The next stage is to find the right sales agent to push product on commission, but finding someone with the right contacts can be a challenge.

“Everyone wants to supply the German market because it’s such a good market so the agents have plenty of choice,” he says.

Sometimes companies moving into Germany outgrow their own modest expectations. That was the experience of Aerogen, a company specialising in aerosol drug delivery thanks to patented technology that turns liquid medication into a fine particle mist for gentle and effective delivery into patients’ lungs.

Over a decade ago, the Galway-based company moved into the German market through a local distributor. That set-up worked well as Aerogen built its base in hospital and homecare firms through ventilator companies. But soon the distributor wasn’t able to meet German customer demand so, 14 months ago, Aerogen took the plunge.

It set up its own base near the western city of Düsseldorf and in little more than a year has grown from three employees – brought over from its distributor – to 11 staff. Global marketing manager Ross Warner says the German office is now posting double-digit, year-on-year growth.

Location has been key and Aerogen’s base in Ratingen, near Düsseldorf, puts the company at the heart of North Rhine-Westphalia, home to one-in-five Germans with an economy stronger than Sweden’s.

“There’s a lot of economic activity here, a number of hospitals and some wonderful business centres available,” says Warner. “We’re 15 minutes from the airport with great transport links into Düsseldorf and trains all over Germany.”

The only wish the Galway-based company has is a direct flight from Shannon to Düsseldorf.

A pleasant surprise entering Germany, he says, was the pragmatism over languages. The old Willy Brandt rule – if you are selling to me, dann müssen Sie Deutsch sprechen (then you have to speak German) – applies to bureaucracy and official business, he says. But in day-to-day meetings, Germany has proven the easiest and most pragmatic place for English he has worked in Europe.

As with all new markets, Germany has been a learning curve all of its own.

Crucial experiences include establishing a local limited liability (GmbH) company and setting up a German bank account after learning that the theory of inner-EU banking did not work in practice. Many clients would not pay into a non-German bank account.

Salary and non-wage costs are quite high, Warner says, and finding staff can be a challenge. New German hires work best, he says, when they have a clear and complete understanding of their role.

Warner says embracing the German culture – making sure everything is clear, concise, organised and documented – has helped the company up its game across the board.

“Because of that we are now better placed to go direct into other markets,” he explains. “We are looking to expand our European operations and are considering a permanent European headquarters based in Germany because of our engagement there.”

O’Sullivan of Irelands Eye agrees on the need to professionalise to succeed in Germany. A crucial first step is to scope out the German market, with EI assistance, and set up meetings with prospective clients without expecting to make a sales pitch.

If you get another meeting, he says, that means the company has done their research and think you might be worthwhile to work with. Arriving on time and getting right down to business is essential. Endless banter, delaying the start of a meeting, is culturally specific to Ireland and not always welcome in Germany. If there’s to be small talk, he warns, then follow the Germans’ lead at the end of the meeting.

“In the early days I felt they were a bit unfriendly and stiff, but they’re not at all, it’s just cultural difference,” he says. “Their time is precious, you’re travelling, so be well-prepared because everyone wants to do business.”

Three years after its arrival in Berlin, Dublin-based digital agency Kooba say one fifth of its business is now drawn from the German market with clients including Germany’s federal economics ministry.

“We were surprised how quickly things developed, certainly in terms of winning business,” said Mr Emmet Dunne, Kooba’s founder and managing director. Berlin has proven an ideal, international base from which to expand, but he advises new arrivals to be sure they are committed to any expansion.

“Have a strong individual in place who really understands the local market and speaks the language,” he said. “Build networks and get involved in anything that helps that happen.

A final word of advice from Irelands Eye: German clients don’t like surprises. Under-promise and over-deliver, O’Sullivan says, and don’t spring news of a delayed delivery on them with two days’ notice.

Germans may be slow to take on new clients but if you are reliable they will be loyal – and pay on time – a welcome message for Irish companies in these days of Brexit uncertainty.