Elaborate shutdown in Beijing ahead of 70th anniversary parade 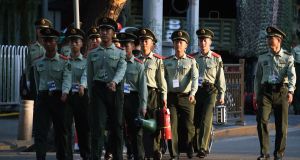 Chinese paramilitary police walk next to Tiananmen Square ahead of a rehearsal of a military parade to mark Communist China’s 70th anniversary, on September 7th. Photograph: Greg Baker/AFP/Getty Images

Drones, kites, lanterns and balloons are forbidden in central Beijing for the next two weeks, and homing pigeons are restricted to their cages, as China prepares for a military parade on October 1st in a massive show of force to celebrate the 70th anniversary of the founding of the People’s Republic of China.

More than 90,000 people were involved in a rehearsal on Tiananmen Square over the weekend, during which time guests in nearby hotels were not allowed in or out of the buildings for 12-hour periods.

Several roads were blocked off in downtown areas and police went door-to-door telling residents with street views to close their windows, pull their curtains, and not to use their balconies.

“We were also told to absolutely not take photographs out the window, and they said they would be closely monitoring the area,” said one resident, who asked not to be named.

When the resident asked if the curtains should stay closed until after October 1st, the police said, “Yes, that would be the best”.

The Beijing municipal government declared the no-fly zone in a published notice that listed detailed restrictions, and said “anyone who violates the rules will be severely punished”.

It called on the racing pigeon association to keep its members in check and “strictly comply” with the order to keep their birds caged for the next two weeks. Keeping homing pigeons is a popular pastime in Beijing and coops are a common sight in many of the city’s older neighbourhoods.

As with previous high-profile events, Beijing will spare no efforts to try to ensure the programme runs seamlessly and there is no opportunity for critics to highlight their cause or embarrass the government in any way.

China’s People’s Liberation Army said they would be showcasing some highly advanced weaponry at the parade, which more than 100,000 people are expected to take part in.

Speaking to reporters last month, army general Cai Zhijun said the parade should not be taken as a display of aggression but should instead be seen as evidence that China is “committed to safeguarding world peace and regional stability.

“We have to point out that this military parade won’t be targeted at any countries or districts or any specific incidents,” he said.

With more than two million soldiers China has the largest standing army in the world, but it still lags a distant second behind the United States in terms of annual military spend.

Last year China’s military budget was US$250 billion (€226 billion), compared to Washington’s expenditure of US$649 billion (€587 billion), according to the Stockholm International Peace Research Institute. China’s budget was equal to 1.9 per cent of its GDP, while the US spend accounted for 3.2 per cent of theirs, the institute reported.

The event will mark the 70th anniversary of the founding of the People’s Republic, after Mao Zedong’s Communists defeated Chiang Kai-shek’s Nationalists in a civil war, forcing their retreat to Taiwan.

The celebrations come at a troubling time for Chinese president Xi Jinping, who has ruled with an iron fist since taking over the party’s reins seven years ago.

On the economic front China is locked in a damaging trade war with the US; his government is facing widespread international criticism for their treatment of Muslims in the northwestern province of Xinjiang; and Hong Kong marks on Monday the 100th day of increasingly violent anti-government protests that have brought chaos and division to the financial hub.