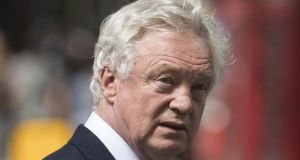 His resignation was swiftly followed by that of fellow Department for Exiting the EU ministers Steve Baker and Suella Braverman. It forces May to reshuffle her government, at the same time as trying to convince backbenchers to support her plan. British foreign secretary Boris Johnson resigned on Monday afternoon.

Mr Davis sent a bluntly worded resignation letter to the prime minister, saying he would not be a “reluctant conscript” to the plan agreed at Chequers, which he said was “certainly not returning control of our laws in any real sense”.

He has told friends he cannot live with the soft Brexit stance agreed between ministers on Friday, which proposes a “UK-EU free trade area”, governed by a “common rule book”.

Mr Davis is said to have been “livid” about hostile briefing from senior figures in Downing Street about how Brexiters would be treated at Chequers – including suggestions they would be given the number of a local taxi firm if they chose to resign.

May had to confront furious pro-Brexit MPs in parliament on Monday, knowing she has lost the backing of one of the leavers’ champions in government.

Downing Street was publicly bullish on Monday, with Dominic Raab replacing Davis in the role of UK Brexit secretary.

The prime minister is facing a growing backlash from the pro-Brexit wing of her party, with MPs warning they are prepared to trigger a leadership contest.

If at least 48 MPs send letters to Sir Graham Brady, the chair of the powerful backbench 1922 Committee, he would have to call a vote of no confidence – though many of May’s supporters in the parliamentary party believe she could win it.

Dozens of Tory MPs have attended emergency briefings in Downing Street since the Chequers summit on Friday, at which Boris Johnson said that colleagues would be “polishing a turd” if they tried to defend the plans to the party and public.

The pro-Brexit Conservative MP Andrea Jenkyns said it was time for May to be replaced. “Honestly, I think yes,” she told BBC Radio 4’s Today programme.

“The time has come that we need a Brexiteer prime minister, really - somebody who clearly believes in Brexit and is really prepared to deliver what the people voted for.”

Her fellow Tory MPs “need to think long and hard over the next few days”, Jenkyns added.

Davis had clashed with May on several occasions in recent weeks, including over when the long-awaited White Paper setting out the government’s Brexit position should be published.

He would prefer a much looser, Canada-style relationship with the EU27 after Brexit – a proposal rejected by the cabinet on Friday.

In her reply to Davis’s resignation letter, the prime minister emphasised he had quit “when we are only eight months from the date set in law” for the UK to leave the EU. She rejected his characterisation that the policy agreed at Chequers on Friday would not bring powers back from Brussels to Britain.

Jacob Rees-Mogg, leader of the powerful European Research Group faction, told BBC Radio 5 Live that Davis’s resignation should force May to reconsider her approach. “Without his imprimatur, it will be very difficult for them [May’s Brexit proposals] to get the support of Conservative MPs and therefore the prime minister would be well advised to reconsider them,” he said.

He told Reuters the resignation was “crucially important” because it showed the extent of concerns about the Chequers agreement. “If the Brexit secretary could not support them they cannot genuinely be delivering Brexit,” he said.

The prime minister also plans a fresh round of high-level diplomacy this week, in a bid to persuade the EU27 not to reject her plan outright.

She is expected to talk directly to European leaders including the German chancellor, Angela Merkel, and the French president, Emmanuel Macron. – Guardian Service