Germany may leave migrants on the road to nowhere 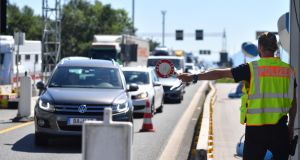 German border police check cars at the control station Schwarzbach on the motorway between Salzburg and Munich. Photograph: EPA/Kerstin Joensson

Exactly 80 years ago this week, delegates from 32 nations met in the French resort of Evian to discuss the plight of German and Austrian Jews. The industrial-scale murder of the Holocaust was still in the future, but the Nazis were tightening their vice on Jews under the discriminatory Nuremberg Laws of 1935.

One in four German Jews – 150,000 people – had already fled, while 185,000 Austrian Jews faced an uncertain future after the Nazi takeover of their country four months previously.

When the conference ended on July 15th, 1938, with almost no change in refugee policy, the Völkischer Beobachter, a Nazi party paper, crowed: “Nobody wants them.”

One observer in Evian was 40 year-old Golda Meir, later Israel’s fourth president. Decades later she recalled her “sorrow, rage, frustration and horror” as, one by one, delegates stood up to say they were unable to take in any more Jews.

“I wanted to get up and scream at them all ‘Don’t you know these ‘numbers’ are human beings, people who may spend the rest of their lives in concentration camps, or wandering around like lepers, if you don’t let them in?’”

Four months after Evian came the violent Nazi pogrom against Jews. Six months after Evian, in a January 1939 speech, Adolf Hitler said “the whole democratic world oozes sympathy for the poor tormented Jewish people, yet remains hard-hearted and obdurate when it comes to helping them which is surely, given their attitude, an obvious duty”.

Eight decades later, even with no Hitler waiting in the wings, the shadow of Evian hangs over Europe.

Other crises have come and gone but what remains is a refugee crisis for which everyone – and no one – feels responsible. This complex and emotive issue may well be Europe’s rendezvous with globalisation, as German politician Wolfgang Schäuble put it. Or it may, as Angela Merkel warned again this week, prove to be the issue that makes or breaks the EU.

Germany’s squalid squabble over ex-territorial “transit camps” on the German-Austrian border shows that even the chancellor – celebrated in 2015 for her liberal, humanitarian refugee policy, then left by her EU colleagues to twist in the wind – can no longer resist pressure for national solutions.

With her government on the brink, Merkel agreed to demands from her Bavarian CSU allies for three closed “transit camps” holding up to 1,500 people each along the 800km border.

The CSU has vowed to tackle what it calls “asylum tourism” with closed facilities for fast-track asylum checks. Those found to have active applications elsewhere in the EU would be sent back there, without being allowed to enter Germany. Others would be pushed back over the border to Austria.

The Bavarians forced migration back onto the agenda after three years backing the chancellor’s approach to refugees, which began as liberal but, responding to a darkening public mood, has become increasingly restrictive.

Facing a state election in October the Bavarians fear a second electoral battering from their conservative voters in little more than a year. The answer to a rising far-right challenge: flex their muscles on migration policy. Announcing closed camps for 4,500 places – when just 28 people cross the Bavarian border daily – was symbol politics at its worst. After three days the game was up, but by then the damage in Europe had been done.

On Friday morning, Germans woke up to hear that the “transit camps” would now be called “transit centres”. Berlin’s centre-left Social Democrats (SPD) coalition partners said they would allow back expedited asylum procedures if people were held at existing police stations and not closed, ex-territorial facilities.

The CSU brinkmanship may or may not save their absolute majority in the Munich parliament: a Bavarian poll on Friday showed them up slightly in polls to 42.5 per cent. But, proving once again that you can’t fight populists with populism, the far-right Alternative für Deutschland (AfD) remains steady on 13 per cent.

In summary, Bavaria’s CSU – to push back against a populist party in its home state – demanded action on a problem that didn’t exist, then embraced a solution that may not work. Berlin’s new asylum plan reflects Angela Merkel’s wariness of unilateral action and allows asylum-seeker returns to other EU countries only on the basis of bilateral agreements – which, in many cases, do not yet exist.

The reality of Germany’s new asylum policy may prove modest, to put it mildly. But when the EU’s largest member state, with more borders than any other, is perceived to be questioning the principle of free movement across the continent, the fall-out will be huge.

The Schengen area is named after the Luxembourg town near where Europe’s open borders agreement was signed in 1985 by five of the 10 members of the then European Economic Community. It now incorporates 26 countries, including four non-EU members, but is already a movable feast.

EU member states from Denmark to Austria have reintroduced border checks, based on an emergency provision introduced at the height of the refugee crisis in 2015. Hungary and Slovenia have erected fences at their Schengen external borders.

Chancellor Sebastian Kurz of Austria, holder of the EU rotating presidency for six months, is calling for a tenfold expansion to 10,000 in the manpower of the Frontex border and coastguard agency.

Mindful of sensitivities in some Mediterranean countries where Frontex operates, Kurz warned that “a Europe without internal borders will only be possible if there are strong external borders”.

Until the EU moves forward together, even Kurz warned Berlin about asylum policy “at Austria’s expense”. Starting on Monday, Vienna will impose a five-day border control regime to Germany and Italy and is ready to impose permanent checks. Rome said it is ready to do the same.

Amid this national posturing and pass-the-migrant-parcel this week, human rights lawyers in Europe have a sinking feeling.

Moderate governments are feeling the squeeze between a wave of new populist governments, emboldened nationalist incumbents and leaders outside Europe who question postwar norms like multilateralism, free trade and human rights.

Dr Hendrik Cremer of Berlin’s Institute for Human Rights argues that European politicians cannot simply legislate away the Refugee Convention agreed in 1951 in Geneva as a response to the failures of Evian.

But that, he concedes, is what he fears will happen to the Dublin EU migration rules. (The Dublin Regulation provides for the transfer of an asylum seeker to the member state through which they first entered the EU.) “The real danger now is that Dublin collapses, and that people are shoved back and forth within the EU, which is exactly what Dublin was supposed to prevent,” he said.

Berlin’s euphemistic talk of “transit camps” comes as German audiences flock to a big-screen adaption of 1944 novel Transit. Written by exiled author Anna Seghers, it tells of wartime Jewish refugees stranded in Marseilles, “unsure if our situation would last until tomorrow, a few more weeks, years or our entire lives”.

For extra urgency, Transit director Christian Petzold shifts the action from 1942 to present-day Europe. In a final, bitter commentary on lessons learned, and Europe’s tortured migration debate today – the final credits roll over Talking Heads singing: “We’re on the road to nowhere.”