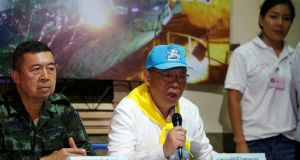 The mother of one of the boys reportedly freed in the northern Thailand cave rescue has said she is sleeping at the cave site as she waits for confirmation her son was among the first four children to make it out.

The four boys who were freed from the cave in an eight-hour operation yesterday were recovering in hospital in the nearby city of Chiang Rai. Authorities have not named the boys who had been rescued – not even to the parents of the group, said Namhom Boonpiam, the mother of Mongkhol Boonpiam.

Mongkhol (14) has been named by Thai media as one of the boys who was freed. Namhom said she had only learned he may have been freed from reports on social media, which the families are tracking from the cave site. “I just heard his name, Mongkhol, and I was happy enough,” she said. She was sleeping at the cave site with many of the other parents and had not yet thought about what she would say once she saw him. “Let me meet him first,” she said.

It is understood the four boys were given preliminary health checks and rushed into ambulances to get them to hospital as soon as possible after they were freed.

Thailand’s sports daily Siamsport reported that Mongkhol had been playing football since he was in kindergarten and loves the sport so much that he almost always wears a football shirt. His favourite team is Muangthong United, a leading team in the Thai Premier League. He also enjoys swimming and cycling. “I believe he will survive,” his mother told Siamsport.

The rescue operation started suddenly at 10am yesterday, nearly one week after the boys were discovered sheltering on a muddy slope inside the cave.

Narongsak Osatanakorn, head of the joint command centre coordinating the rescue, said conditions were “perfect” in terms of the boys’ physical and mental health, water levels inside the cave and readiness of rescue teams.

“Today is D-Day,” he said. He had predicted no boy would emerge before 9pm at the earliest, but about three hours earlier than that journalists posted outside the cave site began reporting the movement of ambulances and aircraft. Soon after, divers and Thai navy officials at the site began confirming that two boys had been released - and then, hours later, potentially more.

At 9pm, Mr Osatanakorn called a second press conference and confirmed four boys had been freed.

He said the operation had proceeded faster than expected. “It has been our masterpiece work,” he said.

Ninety divers were involved in the operation, 50 foreigners and 40 Thais. The remaining eight boys and their 25-year-old coach were expected to be brought out in further operations starting this morning. “Our job is not completely done,” Mr Osatanakorn said. “We will have to do the next mission as successfully as the one we did today. The rest of the kids are in the same spot.” – Guardian service