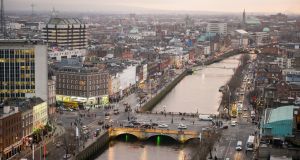 Taoiseach Enda Kenny said Ireland is bidding to replace London as the home of the European Banking Authority. Photograph: iStock

Taoiseach Enda Kenny told a European financial conference in Dublin that the State is “Brexit-ready” as it seeks to win financial services operations in the wake of the UK’s decision to leave the European Union.

“The Government is fully committed to the development of the financial services sector in Europe,” Mr Kenny told a room of international bankers and money managers at the European Financial Forum in Dublin Castle on Tuesday. “Let me be clear that this country will remain an enthusiastic member of the European Union and single market.”

He said Ireland was “prepared to negotiate hard and fair” when it came to the UK’s divorce talks with the union.

Mr Kenny reiterated that Ireland is bidding to replace London as the home of the European Banking Authority. The Government first made the decision in October to seek to secure the EBA.

The Government has set itself a goal of adding 10,000 jobs in international financial services by 2020, compared with a figure of about 35,000 people currently working in areas spanning fund administration to banking and insurance.

Meanwhile, IDA Ireland chief executive Martin Shanahan told delegates at the conference that he expects the financial sector in the UK “will take steps earlier rather than later” to maintain access to the single market, which UK prime minister Theresa May’s government has set its sights on leaving.

“Without doubt, London will remain a major global financial centre,” said Mr Shanahan. “But Brexit creates an opportunity for other centres, including Dublin, to expand,” even if the UK negotiates an “acceptable deal”.