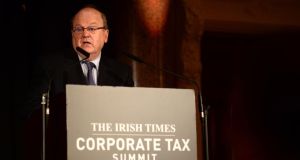 Minister for Finance Michael Noonan says he expects the Brexit process to take at least six years between exit talks and the negotiation of a new trade deal.

This is significantly longer than the two-year timeline proposed by UK prime minister Theresa May in her Brexit speech last week.

Speaking at the Irish Times corporate tax summit in Dublin, Mr Noonan said the Government was “acutely aware” of the potential risks for Ireland, noting there were many difficult issues to be negotiated.

The Government has been undertaking “an extensive programme of engagement” with all other EU governments and the EU institutions to outline Ireland’s key priorities for the negotiations, he said.

These include Ireland’s economic and trading relationship with the UK, the Common Travel Area, Northern Ireland and the future of the EU itself, he said.

“We have done our preparations and are ready for the negotiations,” Minister Noonan said.

On US tax reform, he said he expected an early announcement from the new Trump administration and that changes to the US code were now seemingly inevitable.

Mr Noonan said in practice the US corporate tax rate was zero as many companies simply avoided the headline 35 per cent rate by offshoring profits, a phenomenon US president Donald Trump has pledged to end.

However, Mr Noonan said he did not believe Ireland would be adversely affected by changes to the US code.

“Companies will still need to invest in Europe – and in countries such as Ireland – to serve European markets,” he said, adding that a hard Brexit is only likely to enhance our attractiveness to investors.

On European proposals for a common corporate tax base, seen as a threat to Ireland’s 12.5 per cent rate, Mr Noonan warned the current proposals would cut corporate tax revenue here, potentially prompting cuts to spending or increases in taxes, such as income tax.

“Contrary to common perception, the EU plan would lead to lower receipts from corporate tax, not higher.”

However, this claim was rejected by European Commissioner for economic and financial affairs, taxation and customs Pierre Moscovici, who said the proposed Consolidated Common Corporate Tax Base (CCCTB) would benefit Ireland.

Nonetheless, Mr Noonan noted that Ireland and five other EU parliaments had already objected to the CCCTB proposals, suggesting they contravened the principle of subsidiarity under which key decisions are meant to remain at a national level.

The Minister said Ireland backed international tax reform, insisting it was wrong to characterise reform as a binary choice between “growing your economy and doing the right thing”.

“The long-term direction for Ireland’s corporation tax policy has been to compete successfully from a position of legitimacy,” he said.

On the wider global economy, Mr Noonan said he was surprised at the optimistic outlook for growth in the US, in Europe and in Asia at the World Economic Forum in Davos last week.

Asked about the money needed to fund public sector pay increases of more than €100 million, he said that in each of the last two budgets there was €200 million to €300 million to spare, while noting the amounts agreed were not overly significant in relation to a budget of some €60 billion .

“We will watch it but remain confident that no cancellation of investments or cutbacks will be needed,” he said.