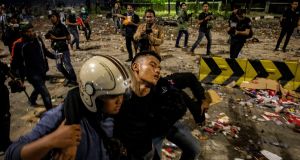 An injured police officer is helped by colleagues after clashes with protesters in Jakarta, Indonesia on Wednesday night. Photograph: Antara Foto/Rusyidi Zain/ via Reuters

Calm returned to the streets of the Indonesian capital on Thursday after a second night of clashes between security forces and protesters angry about the outcome of last month’s election, which handed President Joko Widodo a second term.

The unrest followed an announcement on Tuesday by the General Election Commission confirming that Mr Widodo had beaten his challenger, former general Prabowo Subianto, in the April 17th poll.

Jakarta governor Anies Baswedan said the dead included three teenagers, and 737 people were injured in the rioting, which was concentrated in the central neighbourhood of Tanah Abang. State news agency Antara reported that three hospitals had treated more than 350 people for injuries.

But the ranks of the protesters thinned out over Wednesday night and police spokesman Dedi Praseyto said the last ones had dispersed by 7am.

Roads that were quiet on Wednesday as office workers stayed away from the city centre were abuzz with traffic again on Thursday. City workers in orange overalls swept up the debris.

The election agency has said there was no evidence of systematic cheating and independent observers have said the poll was free and fair.

In other parts of Indonesia, a mob burnt a police station on Madura island, northeast of the main island of Java, while two police posts were set ablaze in Pontianak on Borneo island, media reported.

Police said the number of arrests linked to the riots had risen to 300.

National police spokesman Muhamad Iqbal said officers had found envelopes with money on some of the people they searched, suggesting instigators were behind the trouble.

“This is not a spontaneous incident, this is something by design. There are indications that the mobs are paid and bent on causing chaos,” he said on Wednesday.

Mr Prabowo, in a video posted to his Twitter account late on Wednesday, urged his supporters to disperse peacefully.

“I beg you to return to your homes to rest, avoid any actions that would break the law,” he said.

Mr Prabowo’s political party, Gerindra, complained that the authorities were trying to pin the blame for the riots on him.

Andre Rosiade, a spokesman for Gerindra, said a lawsuit would be filed at the constitutional court on Friday to contest the election result – which gave Mr Widodo a 55.5 per cent share of votes against 44.5 per cent for his challenger.

Mr Prabowo lost the previous presidential election, in 2014, to Mr Widodo by a slimmer margin and objected to the result then too. He also lodged a complaint with the constitutional court but the court rejected it.

Analysts say Mr Widodo’s double-digit margin of victory this time means the opposition does not have a strong case to claim rigging but he may be able to count on agitation over the result by a strong contingent of Islamist supporters.

The government boosted the number of police and soldiers on duty to 58,000 across Jakarta and temporarily blocked some social media functions to prevent fake news that could fan unrest. – Reuters