Life after Theresa May fraught with danger for DUP 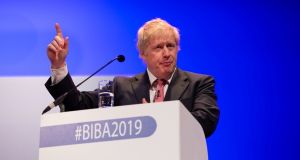 Keeping the Conservatives in power at the expense of the backstop is not something most other Stormont parties will be able to stomach, menacing what hopes there are of restoring devolution in the short to medium term. Boris Johnson in particular seems guaranteed to antagonise nationalists. Photograph: Reuters

There is no choice but to marvel at the confluence of complications now imminent in UK politics, the punchline to which will be the DUP-Conservative confidence-and-supply agreement.

British prime minister Theresa May has promised to bring her EU withdrawal bill to the Commons in early June, where it will almost certainly fail, triggering a Tory leadership contest. Such a contest typically takes two months, although most of that time is allowed for a ballot of party members, which could be shortened by several weeks.

June is also when the current parliamentary session ends, having been extended from its customary one year to two due to Brexit.

With no Commons majority for any form of Brexit, the likeliest outcomes ahead are no deal or no Brexit

There had been talk of extending it further but every other Commons party – including the DUP – has said that would be an outrage if done for Tory management purposes. So a new session needs to start, marked by a new programme of legislation set out in a queen’s speech, despite no new legislation being planned as Brexit has consumed everything.

Scheduled slap bang in the middle of all this is renewal of the confidence-and-supply agreement, without which the government cannot function. The agreement was signed on June 26th two years ago with an effective two-year lifespan. That was the deadline for spending most of its £1 billion of funding, nearly all of which has since been disbursed – the only delay is with £150 million for broadband.

There must also be a review of the agreement at the end of the parliamentary session. It can safely be assumed more funding will be demanded. The health and education sectors in Northern Ireland are already putting in unsubtle bids.

The DUP has always stressed its agreement is with the government, not the prime minister. May will linger on just long enough to renew the deal under her tenure, although her authority will be slipping away.

She might want to press on regardless, and give the DUP cause to co-operate, thanks to another complication. Stormont talks will conclude at the end of this month with a review by the British prime minister and the Taoiseach. May is reportedly keen to see devolution restored on her watch, if only to depart on one positive note. A scenario can just about be imagined where solid progress is announced, with more funding for Northern Ireland the icing on the cake. DUP gloating at this will be hard for other Stormont parties to stomach but they can hardly turn the money down.

However, the DUP might be forced by timing or tempted by circumstance to seek renewal under May’s successor. This would not be about money – it would be about Brexit. The confidence-and-supply agreement committed the DUP to supporting the government on Brexit, budgets, confidence votes and the queen’s speech. After the DUP fell out with May over the backstop, it reneged first on budgets and then on Brexit, claiming the government had reneged on its commitments to unionists.

Renewing the agreement will require repairing this breakdown in relations. That will be most plausible under a prime minister who pledges to ditch or water down the backstop, as all the leading contenders – chief among them Boris Johnson – have promised to do.

What the next prime minister eventually ends up doing, or being able to do, is another matter. However, that is a problem for the next breakdown in DUP-Tory relations.

Keeping the Conservatives in power at the expense of the backstop is not something most other Stormont parties will be able to stomach, menacing what hopes there are of restoring devolution in the short to medium term. Johnson in particular seems guaranteed to antagonise nationalists.

The DUP, which badly wants Stormont back, will have to weigh that risk in the balance but the scales are heavily tipped. On one side is the kudos and influence on offer at Westminster for the next three years of the Conservative mandate; on the other, a northern Assembly that may never return.

Of course there are bigger risks to consider than the timescale for restoring devolution.

With no Commons majority for any form of Brexit, the likeliest outcomes ahead are no deal or no Brexit.

The DUP does not want the hard Brexit a no deal would involve and has consistently said so, but that has become the implication of demanding withdrawal without the backstop.

Renewing the confidence-and-supply agreement around this demand, as the party is politically trapped into doing, means it will appear instrumental in pushing for no deal and will get the blame for that outcome or no Brexit, either of which will place the union under strain, as the latter will antagonise nationalist England.

The DUP has been criticised for overplaying its hand by trying to kill the backstop. That is nothing to how badly it will have overplayed its hand if it succeeds.