Speaking at the Conservative party conference Britain’s foreign secretary has accused the European Union of seeking to put a border in the Irish Sea as a punishment for Brexit. 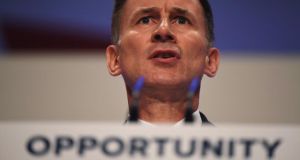 Jeremy Hunt: “What happened to the confidence and ideals of the European dream?” Photograph: Jeff J Mitchell/Getty Images

Britain’s foreign secretary has accused the European Union of seeking to put a border in the Irish Sea as a punishment for Brexit. Jeremy Hunt won a standing ovation at the Conservative Party conference for his blistering attack on the EU, which he compared to a prison.

“At the moment you seem to think the way to keep the club together is to punish a member who leaves. Not just with economic disruption. But even by breaking up the United Kingdom with a border down the Irish Sea,” he said.

“What happened to the confidence and ideals of the European dream? The EU was set up to protect freedom. It was the Soviet Union that stopped people leaving. The lesson from history is clear: if you turn the EU club into a prison, the desire to get out won’t diminish, it will grow, and we won’t be the only prisoner that will want to escape.”

As the party conference got under way in Birmingham on Sunday, Theresa May defended her Chequers proposal as the only plan on the table that would deliver Brexit without undermining the union. Speaking to the BBC’s Andrew Marr, she acknowledged that she could not guarantee there would be no hard border in Ireland if there was no deal.

“If we get to the point of no deal … we as a United Kingdom government are still committed to doing everything we can to ensure there is no hard border between Northern Ireland and Ireland,” she said.

“But there is only one plan on the table at the moment that provides for that frictionless trade across the border and indeed between the UK’s other borders with the EU.”

European Council president Donald Tusk has warned that he will not convene a special Brexit summit in November unless there is progress on agreeing a Border backstop by the time EU leaders meet in Brussels on October 18th. The prime minister suggested on Sunday that she was open to discussing compromises after Mr Tusk dismissed her Chequers proposals as unworkable.

“What I have said to the European Union is very clear. They have said they have some concerns with the proposals we have put together. Let’s hear what those detailed concerns are. If they have got counter-proposals, let’s hear what those counter-proposals are. But what I am clear is that what we have put forward is in the national interest and we did it because what the European Union was offering us was unacceptable,” she said.

The Conservative conference is expected to be dominated by divisions within the party over Brexit, with the prime minister’s critics demanding she abandon Chequers. Former foreign secretary Boris Johnson, who will address up to 1,000 people at a rally in Birmingham on Tuesday, suggested on Sunday that he could negotiate a better deal than Ms May.

“Unlike the prime minister, I fought for this, I believe in it, I think it’s the right thing for our country and I think that what is happening now is, alas, not what people were promised in 2016,” he said.

“What we need to do is build a bridge between our islands. Why don’t we?” he told the Sunday Times.

Former Brexit secretary David Davis was among a number of Conservatives who dismissed the idea of a bridge across the Irish Sea as fanciful.

“I think one of the blights of British politics is politicians having fantastic ideas that cost a fortune and don’t do much good. Boris is a great mate of mine, we have a very knockabout friendship, but quite a lot of his ideas, I think, are good headlines but not necessarily good policies,” he said.