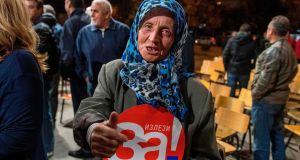 Woman attends a debate on voting Yes on a pact that would see Macedonia renamed North Macedonia in exchange for Greece lifting its 27-year opposition to EU and Nato accession for its Balkan neighbour. Photograph: Robert Atanasovski/AFP/Getty

Low turnout looked likely to invalidate Macedonia’s non-binding referendum on a historic deal with Greece on Sunday, clouding prospects for a pact that would change the ex-Yugoslav republic’s name and open up its path to the EU and Nato.

With 20 per cent of ballots counted, the Yes side had 91 per cent of votes, but 30 minutes before polling stations closed, only 35 per cent of registered voters had cast their ballot. This is far short of the 50 per cent threshold for the referendum to be valid and deals a heavy blow to the Macedonian government and western leaders who back the agreement.

The pact signed in June would see Macedonia renamed North Macedonia in exchange for Greece lifting its 27-year opposition to eventual EU and Nato accession for its Balkan neighbour.

Athens argues that its current use of the same name as a region of northern Greece implies a territorial claim to that area and to the legacy of its storied ancient ruler, Alexander the Great.

The referendum – which was consultative, not binding – asked Macedonians: “Are you for Nato and EU membership with acceptance of the agreement with Greece?”

A procession of top European and US officials visited Macedonia in recent weeks to back a Yes vote and call for strong turnout, warning that such a deal with Greece should be grasped after nearly three decades of stalemate.

Macedonia’s strong nationalist opposition party opposed the agreement, however, and the country’s president, Gjorge Ivanov, used his speech at the UN general assembly in New York last week to describe the deal as “historical suicide” and the referendum as “a noose around our necks”.

The government expected low turnout, blaming out-of-date voter lists that do not account for years of mass emigration from Macedonia, and it is likely to push on from the referendum to a final vote on the deal in parliament.

The apparent failure of the referendum will strengthen the No camp, however, and make it harder for the government to win over the nationalist deputies that it needs to secure the required two-thirds of votes in parliament.

Apparent lack of support for the agreement in Macedonia may also undermine the Greek government’s efforts to secure approval for the deal, in a parliamentary vote in Athens that would take place if the pact was backed by the Skopje assembly.

Speaking shortly after polls closed, a defiant Macedonian prime minister Zoran Zaev said the referendum proved his country’s democratic and EU credentials, and he expressed hopes for a strong victory for the Yes camp.

The nationalist VMRO-DPMNE party, by contrast, alleged that the referendum was marred by violations, and its leaders joined Mr Ivanov in declining to cast their ballots.

“I am not voting in the referendum,” tweeted the party’s deputy chief Aleksandar Nikoloski. “We have a name and it is the Republic of Macedonia!”

Skopje resident Daniel Janevski (30) said he would not vote and insisted that “you cannot just change a country’s name like that. It’s not possible.”

“It’s not a game,” added his friend Gordan Vasevski (30). “You can’t just make a deal on something like this.”