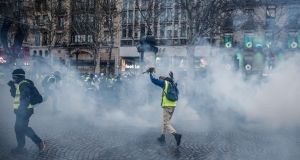 A protester wearing a yellow vest holds a bunch of flowers as he runs through smoke of tear gas during a demonstration on the Champs-Élysées avenue in Paris. Photograph: Abdul Abeissa/AFP/Getty Images

Police used tear gas on the Champs-Élysées after a day of largely peaceful demonstrations in Paris on the fifth straight weekend of protests by France’s “yellow vest” movement.

The demonstrations against France’s high cost of living were significantly smaller on Saturday than at previous rallies, some of which scarred parts of Paris with vandalism and looting.

A few thousand people marched up and down the famed shopping street in Paris, a spirited yet peaceful gathering that sunk into violence as the afternoon wore on.

Riot police clashed with demonstrators as the occasional tourist darted from their hotel or a brave Christmas shopper took a peek at the neighbourhood’s mostly boarded-up storefronts.

By late afternoon, a water cannon in a line of police vans confronting protesters sprayed water to disperse them.

Firefighters put out a blaze on a side street leading to the Champs-Élysées and limited scuffles broke out between protesters and police.

By early evening, police had cleared the avenue and reopened it to traffic.

Protesters made it clear that they wanted to keep up the pressure, even if their numbers were far smaller than in previous weeks, which saw rioters smashing and looting stores and setting up burning barricades in the streets.

French law enforcement was out in force. About 8,000 police and 14 armoured vehicles were deployed in Paris for the demonstration, and streets of central Paris were honeycombed with checkpoints where officers in riot gear checked bags and coats for weapons.

Police said 115 people were taken into custody in Paris, most for banding together to commit acts of violence, and a small number were injured.

Police in riot gear tackled one protester and dragged him off the Champs-Élysées, while his friends said he was doing nothing but exercising right to protest.

The “yellow vest” movement, which takes its name from the fluorescent safety vests French motorists must have in their vehicles, started in mid-November with protests at junctions and roundabouts against fuel tax increases, but quickly became a wider mobilisation against Macron’s economic policies.

Without any clear leadership, it has attracted a wide range of disgruntled people across France’s political spectrum, including some violent militants.

Yellow vest protests were also being held in other parts of France, blocking roads and highways.

Loic Bollay (44), marching on the Champs-Élysées, said the protests were more subdued but the movement would go on until the demonstrators’ grievances were addressed. “Since the Strasbourg attack, it is calmer, but I think next Saturday and the following Saturdays . . . it will come back.”

On Friday, president Emmanuel Macron called for a return to calm in France while several unions and politicians had called on protesters to stay off the streets, after four people were killed in a gun attack at a Christmas market in Strasbourg on Tuesday.

The number of deaths linked to the protest rose to seven after Belgian police said a man accidentally crashed his car on Friday night into a truck that had stalled at a yellow vest roadblock on the French-Belgian border.– AP/Reuters

1 Dublin farmer discovers overnight rave on his land
2 Coronavirus: 188 new cases and no further deaths amid concern over eight counties
3 Varadkar notes ‘strong solidarity’ from EU ministers on Irish Brexit concerns
4 The far right rises: Its growth as a political force in Ireland
5 Safer to meet ‘200 friends in a field’ than 20 indoors, says expert
Real news has value SUBSCRIBE