Brexit: How the deal was done and why the Varadkar meeting was a turning point

How the deal was done: step-by-step from Varadkar and Johnson’s ‘pathway’ talks

Speaking ahead of an EU summit in Brussels. Taoiseach Leo Varadkar has supported the new Brexit agreement, saying that he hopes it passes in the House of Commons. Video: EU Council 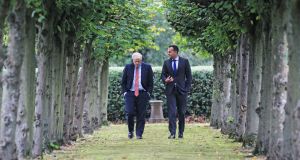 ‘Boris Johnson had already established a much warmer relationship with Leo Varadkar than May ever enjoyed.’ Photograph: PA Wire

After the European Council signed off on his Brexit deal, Boris Johnson spoke about the work that had gone into negotiations “over the last couple of months”. But it was his meeting with Leo Varadkar in Thornton Manor outside Liverpool just a week ago that was the turning point that led to the agreement.

“That was the key moment when I understood there was a joint will to advance on most key issues,” EU chief negotiator Michel Barnier said.

By the time they met, Johnson knew his proposal for a light-touch customs border on the island of Ireland was going nowhere. Downing Street was briefing aggressively against Varadkar and Angela Merkel and the prime minister had run out of ideas.

“He didn’t have anything written on a piece of paper when he went in there,” a British government source said.

But Varadkar, whose officials had been co-ordinating closely with Barnier’s team, did have an idea for unblocking the negotiations and resolving the toughest issue: customs. If Johnson accepted that there should be no customs border between North and South, the EU could agree to two customs territories on the island.

Northern Ireland would leave the EU customs union with the rest of the UK and would enjoy the benefits of any new British trade deals, but it would be treated for administrative purposes as if it had not left. Like a slimmed-down version of Theresa May’s proposed customs partnership, a system of rebates would ensure that Northern Ireland residents would pay the UK tariff only on goods that were not destined for the European single market.

Johnson had already established a much warmer relationship with Varadkar than May ever enjoyed and a meeting in New York last month persuaded both leaders that they shared a determination to agree a deal on Brexit. During three hours of talks at Thornton Manor, for most of which officials were not present, they agreed the outline of what they called a pathway to a deal.

Irish officials immediately briefed the European Commission’s Brexit taskforce and, after a meeting with Brexit secretary Stephen Barclay the following day, serious negotiations resumed in Brussels. Meanwhile, Downing Street started work on persuading the DUP to accept the proposals with historian John Bew taking the lead in contacts with the party.

The DUP had already agreed to a regulatory border in the Irish Sea, a move that angered some of its membership and drew flak from the Ulster Unionist Party. Now they were being asked to agree to thicken that border by adding customs declarations and checks on goods moving from Britain to Northern Ireland.

On Sunday night, Arlene Foster and Nigel Dodds flew from Belfast to London, along with the DUP’s powerful chief executive, Timothy Johnson.  The prime minister had learned from May’s unhappy experience of dealing with the DUP and took a more solicitous and respectful approach in his engagement with them.

Over the next three days, they had numerous meetings with Johnson and his officials, receiving constant updates on the progress of negotiations in Brussels. The DUP were unhappy with the customs proposals but they would consider accepting them if the mechanism for winning political consent in Northern Ireland was sufficiently robust.

After a 10-minute phone call with Varadkar on Wednesday morning, Johnson thought the Taoiseach had made a big move on consent that would be enough to bring the DUP on board. The DUP rejected it that morning but after a meeting on Wednesday afternoon, Downing Street believed they were ready to agree to the new deal.

Following consultations with their membership, however, Foster and Dodds told Number 10 on Wednesday evening that they could not support the deal. At 6.45am on Thursday, they issued a statement rejecting it but saying they would continue to work with the government to get a better deal.

Johnson did not take up the implied offer of further talks and the DUP heard nothing from Downing Street before he announced on Thursday morning that he had reached a deal with the EU. A few hours later, the party issued a longer statement detailing its objections to the deal and warning that it would not only vote against it on Saturday, but would seek to block enabling legislation for it if it passed.

The prime minister showed no sign of regret on Thursday after he jettisoned the DUP to agree the deal, turning his focus instead towards the forbidding challenge of building a parliamentary majority for it without them.