Brexit deal: As the EU held firm, the UK had to cross its own red line

To the fury of the UK, negotiations were never going to be ‘you give a bit, I’ll give a bit’ 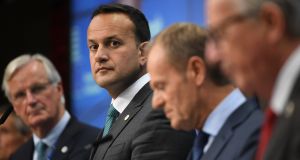 Brexit was originally due to happen on March 29th, two years after then UK prime minister Theresa May triggered the exit process known as Article 50. If Boris Johnson’s deal is backed by the House of Commons, it now is almost certain to happen six months later, at midnight on October 31st.

A long and difficult road that has tested British politics and its uncodified constitution to its limits has seen old loyalties turned on their heads, parties in turmoil and a cull of prime ministers and ministers that has little parallel in its history. Voters and parliament, and courts and executive have been at loggerheads.

At European level the tide of populism that gave the UK Brexit has swept across many states but, remarkably, the sort of political divisions manifest in the UK have not disturbed the rock-like solidarity of the 27 remaining states around the European Commission’s negotiating position – and around Ireland. British negotiators have tried repeatedly, and failed, in attempts to prise the 27 apart or to cast doubt on the authority of chief negotiator Michel Barnier.

In large measure that was a reflection of an old trade-union like solidarity – we stand by our own, and Ireland is a member state. For the smaller states, as Taoiseach Leo Varadkar suggested on Thursday night, it was an article of faith – some day, as the Cypriots do now over Turkish illegal drilling, they too might need to call on that solidarity.

In part it was also the force of the central Barnier message all along: the UK is leaving the EU, not the other way around. It was therefore responsible for finding ways of minimising the damage that did not undermine the union. Negotiations, to the fury of the UK, were never going to be the usual “you give a bit, I’ll give a bit”.

In the Brexit talks that philosophy was reflected in a mantra constantly repeated – and successfully held to in the final deal – that any deal would have to conform to the Belfast Agreement in all its aspects, to ensure no hard border, protect the inviolability of the single market and protect the all-Ireland economy. The trouble was that the UK’s commitment to the Belfast Agreement appeared to Ireland and the 27 to be incompatible with its ambitions to break free of the EU.

But the EU held to its line. In the end it was the UK that crossed its own red line – although Northern Ireland was not to be formally in the EU customs union, it would be in it in all but name but also able to enjoy the advantages of those magnificent trade deals the UK has been promised. Some might say having its cake and eating it.

The resuscitation by Johnson – or was it a Leo Varadkar prompt? – of Theresa May’s idea of “customs partnership”, already rubbished by the EU as unworkable and all too porous, was the key after months spent wastefully fighting the same battles.

Instead of applying it to the whole of the UK, however, it would be just about acceptable in a small economy like Northern Ireland. In a neat piece of political symmetry after May’ s scrapping of the Northern Ireland-only backstop for an all-UK backstop, Johnson swapped the all-UK customs partnership idea for one confined to the North.

The sounding board of Leo Varadkar in Liverpool last week was essential – although not negotiating on behalf of the EU, the Irish role was evolving from first among the partners, trusted implicitly by the task force, to a facilitator that could test ideas out with the British that might be awkward around the formal talks table.

Both the idea of the North remaining in the UK customs union with internal customs controls and the formulations for the consent compromise appear to have come from Varadkar, to whom Barnier made a point of paying tribute on Thursday. The invitation to the Taoiseach to speak at the press conference sent the same message of appreciation.