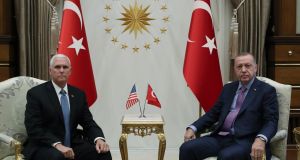 Turkey has agreed to temporarily cease its offensive in northern Syria for five days to enable Kurdish forces to withdraw from a contested area over which Ankara is seeing to take control.

The ceasefire, announced by US vice-president Mike Pence after five hours of talks in Ankara, including with Turkey’s president Tayyip Erdogan, was hailed by Washington but cast by Turkish leaders a complete victory.

Mr Pence said there would be a pause in military operations for 120 hours while the United States facilitated the withdrawal of Kurdish YPG forces from “the affected areas of in the safe zone”.

Turkey says its military offensive against the Syrian Kurds is about creating a 30km “safe zone” across the border, where up to two million Syrian refugees, currently in Turkey, an be resttled.

Mr Pence said that once the withdrawal of Kurdish forces had been completed, Turkey has agreed to “a permanent ceasefire”.

More than 70 civilians and more than 400 fighters have been killed, and an estimated 200,000 people have fled their homes, since Turkey began its incursion last week.

US president Donald Trump’s controversial decision to withdraw US troops from northern Syria following a phone call with Mr Erdogan on October 6th is widely seen to have paved the way for Turkey’s offensive.

The US Congress has reacted with outrage to Mr Trump’s stance. On Wednesday the House of Representatives voted 354-60 to denounce the president’s move, with dozens of Republicans voting against the president. Mr Trump acknowledged on Thursday that he had taken “a lot of heat” for his decision.

Mr Trump’s move was widely seen as an abandonment by the US of its Kurdish allies, who led the successful fight in the region against the Islamic State terror group, also known as Isis.

Mr Pence, who led a high-level delegation including secretary of state Mike Pompeo and national security adviser Robert O’Brien, travelled to Ankara to seek an agreement with Mr Erdogan.

The vice-president said US troops had already begun the process of helping the Kurdish YPG troops withdraw from the “safe zone” area.

Turkey’s foreign minister, Mevlut Cavusoglu, said what had been agreed was not a ceasefire but a “pause for our operation”, noting that “we got what we wanted”.

As part of the agreement, the US has agreed not to impose any further sanctions on Turkey. Once a permanent ceasefire is in effect, new sanctions announced by Mr Trump on Monday would be withdrawn, Mr Pence said.

He said the ceasefire was “a credit to President Trump and to President Erdogan ... Where there are differences between friends it is important that friends let their feelings be known.”

The 120-hour ceasefire will expire next Tuesday when Mr Erdogan is due to meet Russian president Vladimir Putin in Sochi.

Minutes before the press conference, Mr Trump tweeted: “Great news out of Turkey ... Millions of lives will be saved!” He later spoke at length about the agreement as he arrived in Fort Worth, Texas for an event.

“This is an incredible outcome,” he said. “We have got everything we’ve ever dreamed of ... we’ll be able to have control of Isis.”

Defending what he described as his “unconventional tough love” approach to the Turkish-Syrian conflict, he said that the outcome was “something that they’ve tried to get for ten years.”

“This is a situation where everybody is happy. I’m happy because there’s no fighting ... It’s a great day for civilisation,” he said.

It was unclear on Thursday evening if the announcement of a temporary ceasefire would assuage the concerns of sceptical Republicans. Senator Lindsey Graham, who spoke to the president by phone while he was travelling on Air Force One, cautiously welcomed the news.

“Sounds like we may have made real progress regarding a cease-fire and hopefully a sustainable solution that will prevent the reemergence of Isis and the abandonment of our ally, the Kurds,” he said.

But Senator Mitt Romney called for public hearings to be held into the US decision to withdraw troops from Syria, describing the decision as a “bloodstain in the annals of American history”.