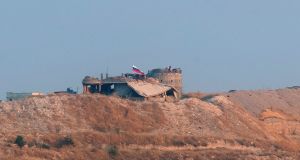 A picture taken from Turkish territory shows a Russian flag and a Syrian flag waving on a hill near the Zor Magar village of Syria. Photograph: Erdem Sahin/EPA

As Turkish forces advanced into northern Syria this week, Vladimir Putin was being feted in Saudi Arabia and the United Arab Emirates, where he held talks on boosting Russian security and economic co-operation in the region.

Meanwhile, the Kremlin’s Syrian envoy went to Tehran to discuss the Syrian crisis with Iran’s security council, and the Russian foreign minister, returning from a visit to Iraq and Irbil, the capital of its Kurdish enclave, was giving assurances that Moscow would encourage its ally, Syrian president Bashar al-Assad, to protect the Kurds in northern Syria in the face of the Turkish invasion.

The flurry of diplomatic activity speaks to Russia’s growing influence in the Middle East and unique ability to find common cause with all major players in the region, even the most antagonistic rivals. These skills will be put to the test next week when Putin, the Russian president, meets his Turkish counterpart, Recep Tayyip Erdogan, for talks at the Russian resort of Sochi.

Erdogan launched Turkey’s military offensive in northern Syria last week, taking advantage of an abrupt decision by US president Donald Trump to withdraw US troops who over the past five years have been supporting Syrian Kurdish forces in the area. Turkey sees the presence of the Syrian Kurds near its border as a security threat and is determined to eliminate the semi-autonomous state they have struggled to establish in northern Syria.

Putin has warned Erdogan that Turkey’s “Operation Peace Spring” campaign could derail the fragile peace process in Syria and unleash a fresh Islamist insurgency. Hundreds of Islamic State fighters have already escaped from jails in north Syria and could move on to wreak havoc in other countries, including Russia and former Soviet Central Asia.

However, while the Russian president has highlighted the risks involved, he has avoided any sharp public condemnation of Turkish aggression.

The Kremlin’s immediate concern was to avert a bloodbath and it has brokered an agreement that will see Assad take his former Kurdish enemies under his wing. The deal negotiated at a Russian air base in Syria has obliged Kurdish forces to surrender strongholds in the cities of Manjbi and Kobani, which are now being jointly patrolled by the Russian military and Syrian government forces.

Putin’s long-term goal is to bring about a lasting peace in Syria that guarantees the country’s territorial integrity and president Assad’s hold on power. Erdogan, who is allergic to Assad, has other ideas. He had been flatly refusing US demands for a ceasefire and is demanding that a 30km-wide buffer zone is established along the Turkish-Syrian border.

Whether Putin can negotiate a mutually acceptable end to the Turkish offensive in Syria with Erdogan is an open question. It’s in his interest to get a deal done before the Astana Syrian peace talks between Russia, Turkey and Iran take place in Geneva at the end of this month.

The talks in Sochi next Wednesday will be as challenging for the Russian president as negotiating the Scylla and Charybdis monsters of Greek mythology, Fyodor Lukyanov, the editor-in-chief of the Russia in Global Affairs magazine, wrote this week.

But whatever the difficulties, Putin sees advantages amid the deepening chaos in Syria, says Kirill Zharov, a Turkey expert at the Moscow Carnegie Centre.

The Kremlin was likely “relieved to see others resolve the problem of the Kurds and their demand for autonomy in northeast Syria that have been getting in the way of partners in the Astana peace process”, he wrote this week.

In the broader context the US troop withdrawal will allow Russia finally to wrest control of the Syrian peace process away from the West and emerge as the single most influential power broker in the most tangled military conflict in the Middle East.