How the choices affect the Irish border, the economy and their chances of success 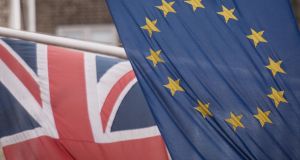 The EU has given Britain until mid-October to strike a deal that will avoid creating a hard border with Ireland. Photograph: Stefan Rousseau/PA Wire

There are exactly six months to go before Britain leaves the EU. With time running out to reach a Brexit deal, Theresa May is confronted with the choice she has tried to avoid since becoming prime minister: retaining unfettered access to European markets or bolstering the UK’s autonomy.

The EU has given Britain until mid-October to strike a deal that will avoid creating a hard border with Ireland – the biggest remaining obstacle in the divorce talks.

But the two sides also have to come to an initial understanding on Britain’s long-term relationship with the bloc, which could determine the country’s trajectory for decades.

The challenge for the prime minister is to find a solution acceptable both to Brussels and the House of Commons that will achieve an orderly Brexit and reduce the uncertainty hanging over business and the economy.

For months she has sought to square the circle with her so-called Chequers proposal, under which Britain would follow the EU’s rule book for goods trade, but go its own way on services and the free movement of people.

But Chequers is opposed by some 60 Conservative MPs and the opposition Labour party. European leaders at this month’s Salzburg summit also objected to it as cherry-picking that could allow the UK to undercut Europe’s stringent regulations.

Here are the remaining options open to the UK and the EU – their prospects for resolve the Irish border question; their likely economic consequences; and their chances of success.

1. Membership of the EEA and a Customs Union

To ensure frictionless trade – avoiding customs declarations for goods at ports – the UK would need to retain membership of a customs union with the EU, precluding separate trade deals with other countries.

Many advocates of this option see this as an interim, medium-term phase until technology can resolve Irish border issues.

George Yarrow, chair of the Regulatory Policy Institute and emeritus fellow of Hertford College, Oxford, has long favoured this stepping stone route for Brexit. “In the long run, a customs union is a seriously inhibiting factor for the UK as a global trading nation,” he said.

Solved as long as the UK remains in a customs union.

This is the least damaging form of Brexit. The government estimates that there will be a hit of 1.6 per cent of GDP to the economy once customs barriers are erected, but this will be significantly less – 0.5 per cent – if Britain stays in the customs union. The government also estimates that there would be no detrimental effect to public finances.

The EEA option would be acceptable in Brussels. It has some support in both the Labour and Conservative parties. But it is not acceptable to Mrs May because it would violate her red lines on three issues: European courts having a role in Britain; freedom of movement; and the ability to strike trade deals ahead of leaving the EU customs union.

2. A customs union with a common rule book in goods regulation

A customs union with the EU would give the UK autonomy over its services, which comprise 80 per cent of the economy, while keeping its membership of the single market in goods and agriculture. Border issues would be resolved but almost all free trade agreements with other countries would be prohibited.

The withdrawal of Britain from the single market in services would be a hit to the economy. The OECD estimates that services trade barriers within the EU are four times smaller than those between the EU and non-members.

Jagjit Chadha, director of the National Institute of Economic and Social Research, said that a middle way “guarantees a reasonable level of trade access to the EU” but there would be costs in “continuing uncertainty over the trading relationship for some time”.

The government has not produced an exact estimate of the costs, but its models suggest a long-term cost of 3 per cent of GDP from the gradual divergence of services regulation

A possible compromise but unlikely to satisfy many people. Theresa May would balk at the membership of a customs union; Brexiters would complain of their inability to strike trade deals and the common regulation of goods; Brussels would see a British attempt to cherry pick the single market. This would be tough to negotiate.

The hard Brexit option. The UK would have autonomy to set its own regulations, and its immigration and trade policies. There would be no tariffs between the UK and the EU, but there would be significant non-tariff barriers from customs and regulatory checks at borders.

Julian Jessop, chief economist of the Institute of Economic Affairs, who supports this option, accepts that there would be costs. “Trade with the EU will not be as frictionless as now,” he said.

He stressed that it is much easier to measure costs of a policy than its longer-term benefits, but he believes there are many potential gains for Britain from autonomous regulations and trade policy.

“An FTA is the combination that has the best chance of minimising the additional costs and maximising the potential benefits,” he said. “I can’t say with a high degree of confidence whether this is definitely better or worse than the current relationship as an EU member. But this action would give us the best possible chance”.

Would require a technological solution, which is currently unavailable, or agreement that Northern Ireland would have a different customs regime and separate goods regulations from the rest of the UK.

The vast majority of economists suggest this would be the most painful form of Brexit: additional trade barriers would be large while potential benefits of trade deals with the US and other countries would be small.

The government model suggests a long-term hit to the economy of just under 5 per cent of GDP. Most other estimates are in a similar range. The IEA is an outlier. It calculates net benefits of up to 7 per cent of GDP, once many trade deals had been signed and what they call improved regulation are introduced.

Acceptable to Brussels, so long as Britain agrees to the Irish backstop, under which there is no hard border dividing the island of Ireland, and to many Brexiter-Conservatives. However, it is unacceptable to Mrs May, on the grounds that the Irish backstop would tear apart the integrity of the UK.

1 Aaron Brady, the man who said with pride he was a cop killer
2 A chronicle of dignity and despair
3 Aaron Brady found guilty of capital murder of Det Garda Adrian Donohoe
4 Case of Covid-19 confirmed at community creche on UCD campus
5 Make a Day of It: Get back into your favourite city centre, Dubs urged
Real news has value SUBSCRIBE