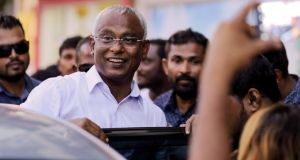 Known to wealthy travellers for its white-sand beaches and luxurious resorts, the Maldives has emerged as the latest arena for the intensifying geostrategic rivalry between China and India – two Asian giants vying for influence in the Indian Ocean.

Last week, 234,000 voters in the tiny island nation played a key role in this new Great Game, taking part in an election that ousted Abdulla Yameen, their autocratic president who had become hostile to India even as he grew closer to China.

The overwhelming triumph of Ibrahim Mohamed Solih – the mild-mannered politician backed by the Maldives’ fragmented opposition – is considered an important strategic victory for India. New Delhi has watched with alarm as Beijing, through its ambitious Belt and Road Initiative, has made deep inroads into what India once considered its natural sphere of influence.

Within hours of the political upset, Solih had spoken to Indian prime minister Narendra Modi and publicly declared that India was the Maldives’s “closest ally”.

The outcome is all the sweeter for New Delhi, given that it had resisted calls from exiled Maldivian opposition leaders – and security hawks at home – to intervene militarily in February, after Yameen imposed a state of emergency and rounded up his critics and political rivals.

The Maldives has an outsized strategic importance for India, given its location astride the sea lanes through which much of India’s shipping cargo passes.

“This is a triumph of Indian patience,” said Brahma Chellaney, an expert on international security issues. “India was a under a lot of pressure from the Maldivian opposition – and public opinion at home – for intervention in the Maldives. I’m glad India erred on the side of caution.

“Had India intervened, we wouldn’t have got this outcome,” he added. “No citizens of any country like a major foreign power to intervene in their domestic affairs.”

Despite its small size, the Maldives has an outsized strategic importance for India, given its location astride the sea lanes through which much of India’s shipping cargo passes. The northernmost tip of the Maldives is just 70 nautical miles from the southernmost point of India’s own Lakshadweep archipelago, where the Indian navy has a base.

Traditionally, the two countries have had close ties, but relations frayed after 2012, when the Maldives’ first democratically elected president, Mohamed Nasheed, was forced out in a coup by the old ruling establishment.

Yameen – in power since a controversial 2013 election – paid lip service to ties with India, and in 2016 even agreed to expand maritime security co-operation with New Delhi. But he also forged much stronger ties with Beijing, which built a 2km bridge from the airport to the capital city; forged a free trade deal; and took long-term leases on several small Maldivian islands.

“China has this ambition – if it were to turn one of the leased islands into a military base, it would open a maritime front against India and complete India’s strategic encirclement,” Chellaney said.

Asking India to take back a gift is a big snub. It’s a strong message for India

Alarm bells rang loud in New Delhi in August 2017 when three Chinese warships docked at a Maldivian port, crossing what New Delhi described as a “red line”, and prompting India to step up its contacts with the Maldivian opposition.

Since the 45-day-state of emergency in February, Yameen’s government became more overtly hostile to India, which had called for free and fair elections to resolve the country’s deepening political crisis.

The government in Malé stopped renewing or issuing visas for an estimated 25,000 Indian workers in the Maldives, including teachers, doctors, and hotel staff. Joint maritime patrols were cancelled, and Malé asked New Delhi to take back two helicopters – and the 48 Indian pilots and engineers that kept them flying – that had been provided to the country, ostensibly for humanitarian purposes.

“There was very clear action directed against India and Indian interests,” one Indian official said. “Asking India to take back a gift is a big snub. It’s a strong message for India.”

The results of Sunday’s election stunned many – not least the president himself given the steps he had taken to ensure his own victory. Some in Malé and New Delhi are concerned that Yameen, who has conceded, may still be reluctant to step down when his term expires in mid-November.

Even if the transfer of power goes smoothly, China will remain an influential player in the Maldives, given its financial leverage over the country. Indian analysts say an estimated 80 per cent of the Maldives’ total debt – equivalent to about 25 per cent of gross domestic product – is owed to China.

Although Solih and other opposition leaders have vowed to review contracts with China, analysts say the Maldives may find it hard to wriggle out of even unfavourable commitments made by the previous government.

“Even if the new government wants to renegotiate these deals, the process is not going to be easy,” says Nitin Pai, co-founder of the Takshashila Institution, a public policy think tank.

Still, he said, the developments were “good news” and an “opportunity” for India. “It’s not like the Maldives has fallen into our laps,” he said, “but it’s a second chance to re-establish some kind of influence in the Maldives.”

In New Delhi, officials say they have no objection to strong Maldivian commercial ties with China, but Malé should be mindful of India’s security concerns, “We don’t want any third power sitting and watching our shipping movements,” one official said. “Our expectations are that the new government will be sensitive . . . [and] know our red lines.” – Copyright The Financial Times Limited 2018