What the papers say: ‘Get real – take the deal’ 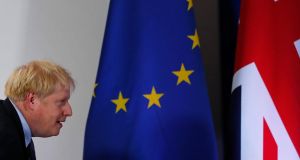 The British press has broadly welcomed the deal that Boris Johnson secured with the EU in Brussels on Thursday pronouncing it as a major improvement on previous deals agreed by his predecessor Theresa May.

Support for the deal is particularly pronounced among the Brexit-supporting newspapers in the UK as evidenced by their front pages – and they are designed to put pressure on MPs.

A long-time cheerleader for Brexit, the Sun spells it out in no uncertain terms to MPs. “Get real – take the deal”, it urges them and says Johnson “pulls off miracle Brexit plan”.

In a front page editorial, the Sun adds: “Boris Johnson, against all odds and in defiance of sneering critics, has pulled off a vasty-improved deal. The Sun urges every MP; back it tomorrow and get Brexit done”.

The Daily Mail issues a similar ultimatum to MPs on its front pages. “Against all odds, Boris has won a new Brexit deal – yet tomorrow our reckless political class may derail it,” the paper states. “So today the Mail say he’s done his duty. Now MPs must do theirs”.

The Daily Express, the most strident of the Brexit-supporting newspapers, has the simple exhortation to MPs on its front page. “Just do it – that’s the very loud and clear message from the British public to our parliament”.

The Daily Telegraph, a supporter of Johnson, showcases a comment piece on its front page from one of its most prominent columnists Allister Heath.

“Politics still matters, as does leadership, vision and statescraft. By sheer willpower, Mr Johnson and his advisers have delivered a radically better deal for Britain, forcing the EU’s technocratic juggernaut into a screeching U-turn,” he writes. “It can’t be done, we were told ad nauseam and yet he delivered, proof he is, in fact a statesman”.

The remain-supporting Times newspaper has a similar message to politicians as the leave-supporting press. “Just do it,” the headline over the paper’s editorial states.

“Three months ago The Times backed Boris Johnson to become prime minister on the basis that he was the candidate most likely to secure a Brexit deal and thereby draw a line under a saga that has destabilised British politics for too long. Yesterday he justified that confidence by agreeing a deal with Brussels that even as recently as last week has appeared highly unlikely. There is no question that in doing so he has show political courage”.

The Financial Times sounded a cautionary note on its front page, warning that Johnson’s hopes of leading Britain out of the EU by October 31st were “hanging in the balance”.

The paper’s editorial says the deal secured by Johnson is better than the alternative which was a no-deal, yet it was far from the soft Brexit that the paper wanted. “If Mr Johnson’s exit deal does secure a parliamentary majority, there is a strong argument that it should be put to people in a confirmatory referendum against the option of remaining. This step is starting to gain political momentum and indeed Mr Johnson may need to offer such a vote to secure majority parliamentary support.”

The Guardian is the most pessimistic of all the British newspapers stating that the “arithmetic looks daunting for Johnson”. It points out that he will need the support of Labour MPs and the 21 Conservatives he expelled from the parliamentary party for backing the Benn Act last month.

In an op-ed article, former British prime minister Gordon Brown stated that there is a danger that the next UK general election will be the last. “Johnson’s deal is, we now know, even more fatally flawed than Theresa May’s in vital respects; it threatens to make Ireland a smugglers’ and tax avoiders’ paradise and ushers in a race to the bottom in social and environmental standards”.