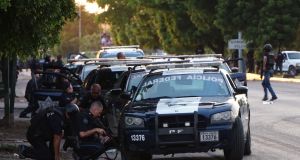 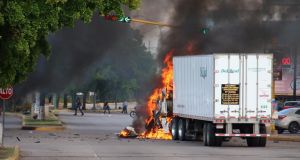 A truck burns in a street of Culiacan, state of Sinaloa, Mexico, on October 17th, 2019. Photograph: STR/AFP via Getty Images

Mexico’s president Andrés Manuel López Obrador approved the release of a son of jailed drug lord Joaquín “El Chapo” Guzmán on Thursday, after security forces were overwhelmed by the firepower of the Sinaloa cartel during a bungled raid to capture him.

Mr López Obrador told reporters security forces had tried to capture Ovidio Guzmán, a 28-year-old son of the jailed cartel boss nicknamed “The Mouse”, at a house in the Sinaloa state capital on Thursday afternoon, acting on an extradition request from the US.

In a separate news conference, Luis Cresencio Sandoval, defence minister, admitted that the operation was “rushed and badly planned”. While officials were waiting for a formal arrest warrant, 30 to 35 police and troops were surrounded by cartel members and one official and seven soldiers were taken hostage.

Cartel members cruised the streets with high-calibre weapons, fuelling panic among residents who took cover with small children behind cars. They blockaded roads with burning trucks and shot up a state helicopter and eight vehicles, Mr Sandoval said. Two vehicles belonging to security forces were still missing on Friday, he added.

Images shared on social media showed what appeared to be convoys of cartel trucks patrolling the city’s streets on Thursday night. “This was a disaster ... last night, the city was completely theirs,” said Ricardo Márquez Blas, a security expert.

“We underestimated the criminals’ capacity to summon support and to respond,” said Mr Sandoval in Culiacán. Security minister Alfonso Durazo, who only on Monday had been hailing a “tipping point” in the rising number of murders in Mexico, said he would be willing to resign.

“The clear message was that the state does not have control in that territory,” said Catalina Pérez Correa, an expert on security at CIDE university.

Mr López Obrador, who on Thursday launched work on a new Mexico City airport being built by the army, was defiant despite the debacle. “Our strategy is going very well because we are dealing with the causes that lead to violence,” he said in the southern city of Oaxaca.

He said he had supported a recommendation from his security cabinet that, in the light of the chaos and in order to prevent widespread bloodshed, troops should let Mr Guzmán go. Mr Sandoval said he had been held for two hours.

The message to Mexican cartels was “you can blackmail the Mexican state at will”, said Alejandro Hope, a security consultant. “This has been a terrible week for Amlo on the security front. It’s not a week to claim you’ve reached an inflection point."

“I cannot remember any single situation of a capture and then voluntary release [of a presumed drug trafficker],” he said.

Thursday’s warlike scenes marked a serious escalation of violence after two major clashes elsewhere in Mexico this week killed 29 people. In one, police were ambushed by the Jalisco New Generation cartel, Mexico’s most aggressive.

Mr López Obrador has summed up his security strategy with the slogan “hugs not bullets” and has urged cartel members to “think of their mothers”. He dismissed the suggestion that cartel members could be emboldened by their victory on Thursday. “We are not going to change our policy.”

In addition, 49 prisoners broke out of jail in the city, and to date only two had been recaptured, Mr Durazo said.

Mr López Obrador has vowed to pacify the country, where several states are immersed in extreme violence, and says his programmes of bursaries for young people will help stop them falling into the clutches of organised crime.

The government has also called on the US to do more to stop the flow of guns south of the border, most of which find their way into the hands of criminals.

On Monday, hours after Mr Durazo said the upward trend in homicides had reached an inflection point, 13 police were killed in an ambush in the western state of Michoacán by the Jalisco New Generation cartel.

The following day, one soldier and 14 civilians were killed in an attack in the state of Guerrero, although human rights groups have urged a full investigation amid suspicions of extrajudicial killings.