DUP would have preferred if May did not sign deal, says it won ‘six substantive changes’ 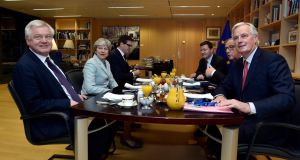 Taoiseach Leo Varadkar said a deal reached this morning between the UK and the EU Brexit negotiating team contains a “politically bullet-proof” agreement to avoid a hard border on the island of Ireland after Britain leaves the EU.

Mr Varadkar was speaking in Dublin after the European Commission decided to recommend to EU leaders that Brexit talks with the UK move on to discussions about trade and their future relationship after it decided “sufficient progress” had been made.

“The strongest political commitment that exist in this document is the commitment that there will be no hard border ... They are politically bullet-proof. They’re cast iron,” Mr Varadkar said.

Officials in Dublin believe the deal reached this morning means the UK will have a new relationship with the EU as close as possible to the status quo.

Asked if the deal now made a soft Brexit more likely Mr Varadkar said: “As we get into the detail more and more, the British people will understand why it makes sense that we have very similar or almost identical rules and regulations.”

The Taoiseach also said he wanted to assure unionists of his motivations. “There is no question of us trying to exploit Brexit to move toward Irish unity without consent,” he said.

The full text of the agreement can be seen here

The key points of the deal are a guarantee of no hard border in Ireland and that the “constitutional and economic integrity of the United Kingdom” will be maintained.

It has also been agreed that EU citizens living in the UK and vice versa will have rights to live, work and study protected. Special arrangements for Irish people in the UK and British people here will also continue.

A financial settlement of the UK’s liabilities to the EU which is “fair to the British taxpayer” has also been reached which is estimated at between 35 billion and 39 billion.

Mr Varadkar said the Irish Government had “achieved all that we set out to achieve in phase one of these negotiations”.

The deal has been sent to the leaders of the EU 27 states ahead of a summit next week with a recommendation that it be accepted. If it is agreed, then ‘phase two’ talks on post-Brexit trade deal between the UK and EU can now go ahead.

Today’s agreement also states that a separate strand of the negotiations in phase two will be concerned with Irish issues.

However, the Democratic Unionist Party, whose opposition on Monday led to talks breaking down, said “more work” needed to be done and said how it voted on the final deal would “depend on its contents”.

The DUP made clear on Friday it did not want Ms May to sign the statement in its current form because of the number of issues outstanding. The party supports Ms’s May’s government in Westminster.

DUP Brexit spokesman Sammy Wilson MP told The Irish Times the party had got assurances in the document “that we will be leaving the customs union and the EU along with the United Kingdom, we have assurances on that and we will have totally unfettered access to the UK’s internal market.

He said today’s document had “spiked the Taoiseach’s republican agenda”.

“Leo Varadkar’s actions betray his words. The way he tried to drive a wedge between Northern Ireland and the UK. None of the politicians we dealt with over the years would have dealt with it the way those two - Coveney and Varadkar, did.”

“We were pleased with that, the unionist part of it, but I think there is still some ambiguity around this full alignment issue.

Mr Wilson said what his party would now do was monitor how the British government ensures a frictionless border “without compromising any of the ideals that have been put forward in this document”.

Earlier, DUP leader Arlene Foster said her party had won “six substantive changes” to the text on the Irish border in overnight talks, ensuring there would be “no red line down the Irish Sea”.

The breakthrough followed an overnight agreement between the commission’s Brexit task force and Downing Street which prompted British prime minister Theresa May to fly to Brussels to sign the deal with European Commission President Jean-Claude Juncker. Mr Juncker said the “result is of course a compromise”.

Mr Juncker said the commission was satisfied “sufficient progress has been achieved in each of the three priority areas of citizens’ rights, the dialogue on Ireland / Northern Ireland, and the financial settlement.”

If it does not prove possible for the UK to reach agreement on regulatory alignment with the EU, “we will look to the uniquely circumstances of Northern Ireland,” Ms May told journalists at a press conference in Brussels.

Ms May said the deal would ensure “no hard border” in Ireland and added the deal was a “significant improvement” which had required give and take on both sides and that she would continue to govern in the interests of Northern Ireland and uphold the Belfast Agreement.

The move is considered a breakthrough after a proposed deal on Monday collapsed when the DUP objected to the wording, which it said could result in Northern Ireland getting detached in regulatory terms from the rest of the UK.