North-only backstop may be among Johnson’s dwindling options 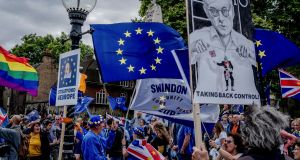 As Boris Johnson arrives in Dublin to meet Taoiseach Leo Varadkar, he is a prime minister fast running out of options. Parliament has legislated to stop him taking Britain out of the European Union without a deal on October 31st. And Jeremy Corbyn has outwitted him by denying him the October general election he was planning for.

Despite the bluster from Downing Street about a supreme court challenge, Johnson will be obliged by law to seek a three-month delay to Brexit if he has not secured a withdrawal deal by October 19th. With no possibility of an election before November, the only way he can fulfil his promise to leave the EU by October 31st is to do so with a deal.

The Irish Government will not agree to any alternative to the Northern Ireland backstop that is not based on regulatory alignment across the island. But the alternative arrangements for the Border proposed by Johnson’s allies are designed to manage and reduce the friction between two divergent regulatory regimes.

For Johnson, much of the purpose of leaving the EU is to escape its regulatory orbit. The future trading relationship he seeks is a loose one, outside the customs union and single market and with few “level playing field” commitments on competition policy, state aid rules and environmental and other standards.

Last week, the prime minister floated the idea of an all-island regulatory regime in Ireland for agri-food, which could see Northern Ireland diverging from the rest of the United Kingdom and would see regulatory checks between Britain and the North. In Wakefield on Thursday, he suggested that other sectors could also be part of an all-island regulatory regime, but that it “depends entirely on democratic control by the people of the United Kingdom”.

Johnson has come close to endorsing the principle of what Varadkar described on Sunday as “a single Irish economic zone” if the issue of “democratic control” is resolved. The DUP insists that elected representatives from Northern Ireland must have a say over any new regulations introduced by the EU that would apply to the North after Brexit.

Their argument about disenfranchisement finds much sympathy at Westminster. Dublin and Brussels will be slow to agree to giving Stormont any kind of veto over new single market rules.

A Northern Ireland-only backstop could allow Johnson to leave the EU on time and with a deal that would allow him to pursue the kind of Brexit he believes in. But it remains unclear if he is willing to take the political risk it requires, that he has the skill to persuade the DUP to back it and the authority to ensure that hardline Conservative Brexiteers fall into line.