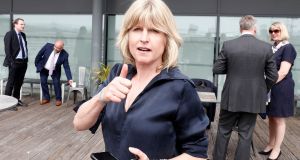 The anti-Brexit party Change UK - The Independent Group has announced its candidates for next month’s European elections after receiving more than 3,700 applications.

Among them are former Labour, Tory and Liberal Democrat politicians and activists, as well as people with no previous political affiliation or involvement.

Rachel Johnson, the sister of former foreign secretary Boris Johnson, and the broadcast journalist Gavin Esler – who said Brexit was based on “cheating and lies” and was sick of the likes of Nigel Farage and Jacob Rees-Mogg selling “snake oil” – will also stand as candidates.

The party chose the We The Curious science centre in Bristol for its launch, during which 50 of its candidates perched on a stage against a backdrop of posters featuring brightly coloured stripes. One observer described the scene as resembling a “trendy sweet shop”.

The politicians and workers have had to pull the launch together speedily after Mr Farage’s new Brexit party surged past Labour and the Conservative party in an opinion poll.

Heidi Allen, the former Tory MP, described the candidates as “Tiggers”, adding: “This is no rebel alliance, this is the home of the remain alliance. If you’re fed up with our broken politics join us.”

She said the MPs who defected had no choice but to say, “enough is enough”. She said the Tories had moved further to the right and Labour had let the country down.

Change UK is calling on voters disillusioned by the chaos of Brexit and the politics of Farage and Ukip to vote for the party to send a strong message to the established parties that they want a change in direction.

It says the individual stance of Labour or Tory MEPs who claim to support a people’s vote is irrelevant because it is the party and not the individual on the ballot paper.

The party claims every Labour or Tory MEP candidate is a sponsor of Jeremy Corbyn or Theresa May’s stance on Brexit.

Change UK has morphed out of the The Independent Group, which was formed after eight Labour MPs and three Tory MPs left their parties in February.

In March, the group applied to become a party and was given approval in April, meaning they could field candidates in the European elections. – Guardian