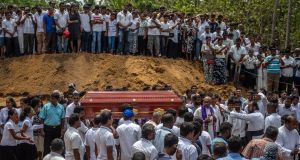 A coffin is carried to a grave during a mass funeral at St Sebastian Church on April 23rd, 2019 in Negombo, Sri Lanka. Photograph Carl Court/Getty Images

The perpetrators of the Sri Lanka suicide bombings in churches and luxury hotels on Easter Sunday were suspected of having links to Islamic State, the prime minister Ranil Wickremesinghe said on Tuesday, as survivors of the attacks that killed 321 started burying their loved ones.

“There are suspicions that there were links with Isis,” said Mr Wickremesinghe, speaking at a press conference on Tuesday evening. “All that we knew earlier on was that there were foreign links and that this could not have been done locally.”

The terror group claimed responsibility for the Easter attacks via its Amaq news agency on Tuesday.

Mr Wickremesinghe said the authorities had identified most of the suicide bombers and attackers – who were all Sri Lankan nationals – but that other suspects, potentially armed with explosives, were on the run.

Defence officials said seven suicide bombers had been identified and that their family members had been taken into custody. All the bombers died in the attacks.

The synchronised attacks on Sunday killed 321 people – 45 of them children – who had gathered for Easter services at three churches in Colombo, the nearby town of Negombo and the eastern town of Batticaloa, and for breakfast at three luxury hotels in Colombo – the Kinsbury, Shangri-La and Cinnamon Grand.

Colombo said the attacks, the island nation’s worst violence since the country’s decades-long ethnic civil war ended in 2009, were carried out in retaliation for the New Zealand terror attack on two mosques in March.

A 28-year-old far-right extremist, Brenton Tarrant, was charged in connection with those attacks, which left 50 dead.

In Negombo, where more than 100 were killed by a blast in St Sebastian’s church, military and police patrolled the streets on Tuesday to protect mourners. “We’ve never seen carnage like this before,” said Nickson Revera, whose mother-in-law died in the blast. “We don’t understand why this happened.”

Sri Lanka’s failure to act on multiple intelligence warnings has exposed the deep dysfunction of the government, which has been paralysed by bitter rivalry between Mr Wickremesinghe and President Maithripala Sirisena, who blame each other for the security breakdown.

Government officials have said that security agencies were informed by US and Indian authorities that Mohammed Zaharan, leader of the National Thowheeth Jama’ath, one of the extremist groups Colombo has blamed for the attacks, was plotting suicide bombings as early as April 4th.

The last tip-off came 10 minutes before the first bombing on Sunday, a diplomatic source said. Yet the message never reached the government.

Speaking at a special session in parliament on Tuesday, Ruwan Wijewardene, state defence minister, blamed the attacks on the National Thowheeth Jama’ath and another group he identified only as JMI.

Mr Wijewardene admitted there had been a “weakness in security structure” ahead of the bombings. He said that he, along with the prime minister, had been sidelined by Mr Sirisena and left out of national security council meetings since a political crisis in October last year, when Mr Sirisena ousted his erstwhile ally and tried to replace him with Mahinda Rajapaksa, a former president.

Mr Wickremesinghe and his cabinet were eventually reinstated by the supreme court, but tensions still afflict the functioning of government

Mr Sirisena, who is also the head of the defence ministry, on Tuesday blamed security forces for the communication fiasco and announced that he intended to change the leadership of the police and armed forces.

The blasts have threatened to bring the Sri Lanka’s tourism-dependent economy to its knees. The Colombo stock exchange fell nearly 4 per cent on its opening after the attacks.

The streets of Colombo were laced with lines of white plastic ribbons that fluttered in the wind on Tuesday, a symbol of mourning. In Negombo, 40km north of Colombo, there were too many bodies to fit into the cemetery, so a donated piece of land was converted into a burial ground.

By noon, 20 people had been laid to rest. As the priest read the last rites, two workers made room for more graves. “We believe they are going to heaven,” said Father Suranga Warnakulasuriya about the victims. “They are martyrs.” – Copyright The Financial Times Limited 2019