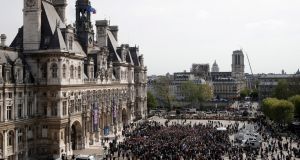 Hundreds of people gather in front of the Paris city hall in France during a tribute to the Paris firefighters who saved Notre Dame Cathedral from collapse. Photograph: EPA

Investigators think an electrical short-circuit was the most likely cause of the fire at Notre Dame Cathedral, a police official said.

The fire, which broke out on Monday evening in the attic of the iconic Paris cathedral caused extensive damage. The cathedral was undergoing renovation work at the time.

Hundreds of people gathered in front of the Paris city hall on Thursday, during a tribute to the Paris firefighters who saved the cathedral from collapse, while construction workers worked to secure an area above one of the building’s famed rose-shaped windows and other vulnerable sections of the fire-damaged landmark.

President Emmanuel Macron formally launched the reconstruction of the cathedral on Wednesday at a meeting with the prime minister, six cabinet ministers, the head of Unesco, the mayor of Paris, the archbishop of Paris and officials in charge of architectural heritage.

Prime minister Edouard Philippe announced that a draft law intended to provide a legal framework for the reconstruction will be presented next week.

More than €1.1 billion has already been raised. Mr Philippe said 75 per cent of contributions of up to €1,000 will be tax exempt, while donations of more than €1,000 carry a 66 per cent deduction against tax. An earlier law, which gives a 60 per cent deduction for patronage of the arts, will apply to large corporations.

The tax deductions have created the first controversy of the reconstruction effort, with opposition politicians noting that taxpayers will have to make up the revenue shortfall. The Pinault family, who have pledged €100 million, said they will not claim the deduction.

Mr Philippe said an international competition will choose an architect “to endow Notre Dame with a new spire adapted to the techniques and challenges of our era”. - PA