South Africa is the most affected country, with more than 52,000 confirmed cases 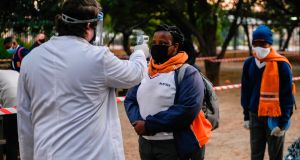 A teacher measures the temperature of a pupil before school starts in Pretoria, South Africa. Photograph: Christiaan Kotze / AFP via Getty

Africa topped 200,000 confirmed coronavirus cases on Wednesday, less than three weeks after the continent passed the 100,000 mark, on May 22nd.

More than 91,000 people have recovered, while more than 5,500 have died, according to figures from Johns Hopkins University in the US.

World Health Organisation director general Tedros Adhanom Ghebreyesus, who is Ethiopian, warned Africa to “prepare for the worst” back in March, but the virus has been slow to spread on the continent. Expertise developed from previous outbreaks of diseases such as Ebola, HIV/Aids and cholera proved useful, and many countries moved quickly to impose lockdowns, closing borders and bringing in contact tracing systems.

However, there is now growing concern that some countries are under-reporting cases due to limited testing capacities, or downplaying their figures because of political pressure.

This week, Tanzania’s president, John Magufuli, declared his country coronavirus free, saying the disease was “eliminated thanks to God”. Official data has not been released since the end of April, when Tanzania had more than 500 cases. In May, videos of secretive nighttime burials went viral on social media, calling Tanzanians to question whether the government was hiding the true extent of the crisis.

Joyce Banda, a former president of Malawi, told a campaign rally on Tuesday that her southeastern African country had no cases of the virus and was “faking” the numbers, and should spend its budget on development instead. Malawi has 455 confirmed cases and is expected to go ahead with a presidential election on June 23rd.

This week, Burundi’s government announced the death of president Pierre Nkurunziza. While the officially stated cause was a heart attack, rumours are swirling that the 55-year-old had contracted Covid-19. Nkurunziza repeatedly downplayed the risk of the pandemic, saying that Burundi had been spared it because of God’s will. Elections held on May 20th were won by the CNDD-FDD ruling party.

As coronavirus continues to spread, experts are concerned that African healthcare systems lack the capacity to deal with it. While lockdowns gave states more time to prepare, a May survey by Reuters found that, on average, there is fewer than one intensive care bed and one ventilator per 100,000 people across Africa.

Many of the continent’s population of 1.2 billion live in overcrowded conditions where social distancing is impossible, and access to water and soap is not always guaranteed. A lack of social protections also means coronavirus-related restrictions hit poorer citizens badly. A common concern heard from Africans in several countries is that hunger will kill more people than the disease does.