The Irish Times view on the summer economic statement: preparing for a no-deal Brexit

Paschal Donohoe is trying to walk a line between two possible outcomes: continuing strong growth and the shock of a no-deal Brexit 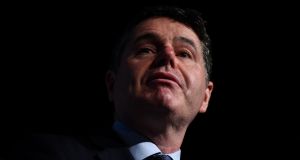 The Summer Statement, published yesterday by Minister for Finance Paschal Donohoe, tries to walk a line between two possible outcomes – a continuation of relatively strong growth on one hand and the risk of a sharp economic shock from a no-deal Brexit on the other. Photograph: Clodagh Kilcoyne/Reuters

Budget planning starts in earnest this year against the backdrop of an unusual level of uncertainty, related largely to the risk of a no-deal Brexit. The UK is due to leave the EU a few weeks after the budget on October 8th. The Government may have a better idea of the shape Brexit will take before the budget, but there is a very significant risk that it will not. Through no fault of its own, this leaves it in a bind because a no-deal Brexit will upset its forecasts for economic growth and thus tax revenue and require some extra spending.

The summer statement, published yesterday by Minister for Finance Paschal Donohoe, tries to walk a line between two possible outcomes – a continuation of relatively strong growth on one hand and the risk of a sharp economic shock from a no-deal Brexit on the other. Ironically, the threat of a no-deal outcome is pushing the Government to be cautious, which is what it needs to be anyway if growth continues at its current strong rate.

The theory, as the summer statement explains, is to avoid adding more fuel to an already fast-growing economy. In turn, by doing this, the Government will aim for a budget surplus next year. If a no-deal Brexit happens, the budget will be allowed to move into a deficit. It is a difficult balance, particularly as the nature of a no-deal Brexit makes it difficult to calculate its impact.

A few points are relevant. One is that the exchequer finances have been on a strong run in the last few years, driven largely by soaring corporation tax. Using some of the resulting cash to boost investment was justified, but had more been done to control day-to-day spending, we would have a bit more leeway to deal with the uncertainty of Brexit.

The second is the importance of keeping spending on target this year, notably in health, which has been overspending significantly. Strong tax revenues have covered up this overspending in recent years. But we simply cannot rely on this continuing.

There is a more fundamental point here, too, which relates to the longer-term trends in tax and spending. There are doubts about the sustainability of some tax revenues and the Fiscal Advisory Council has raised questions about the Government’s long-term spending plans which, it says, are not credible. With economic growth likely to slow, sooner or later, we need to be sure that the public finances are on a solid footing and that money is being spent efficiently.

Important decisions will have to be made, first, about Budget 2020. This will involve facing down many demands for higher spending and lower taxes. This will be a difficult job with the budget likely to be the last one before a general election. Events in the UK suggest, unfortunately, that the threat of a disruptive, no-deal Brexit remains all too real.

1 UK to close borders to non-English speakers and unskilled workers
2 Draining the swamp? Trump in spree of clemency for rich white men
3 Sinn Féin seeks to draw line under TD’s ‘unacceptable’ tweets
4 Planners probe Dermot Bannon’s garden bath den
5 A Russian cruiser with ‘cannibal rats’: What other ‘ghost ships’ could be out there?
Real news has value SUBSCRIBE