First round win leaves Johnson on course to be next PM 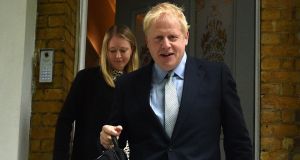 Boris Johnson leaving his London home on Thursday. He is almost certain to be one of two candidates who will go before the party membership of 160,000. Photograph: Glyn Kirk/Getty Images

Boris Johnson is on course to become Britain’s next prime minister after winning a resounding victory in the first round of voting by MPs in the Conservative leadership election.

The former foreign secretary and London mayor won 114 votes, more than one third of the total and more than the combined votes of the next three candidates.

The result leaves Mr Johnson almost certain to be one of two candidates who will go before the party membership of about 160,000, among whom he has long been the most popular contender. The remaining six candidates have until 1pm on Friday to decide whether to stay in the contest for the next round of voting next Tuesday.

Three candidates were eliminated, including the only two women in the contest, former Commons leader Andrea Leadsom and former work and pensions secretary Esther McVey.

Mr Gove, whose campaign was overshadowed this week by controversy over his past use of cocaine, said it was “all to play for” in the contest. “I now want to make sure we have a proper debate about ideas,” he said.

Mr Johnson has faced criticism for avoiding broadcast interviews, taking just six questions from reporters during his campaign launch and refusing to commit to taking part in televised debates with other candidates.

“He doesn’t have any policies, certainly none that are consistent from day to day in the way he puts them. I don’t actually think he knows what he would do to get us out of the Brexit crisis.

“He doesn’t always say the same thing, partly because he doesn’t always remember what he said the day before. He tends to work day to day and just get his way through it – he’s not a man who’s interested in detail.”

Mr Johnson has promised to take Britain out of the EU by October 31st with or without a deal. However, he said this week that he would not pursue a no-deal Brexit, which he described as a “last resort” that Britain must prepare for.

The EU has ruled out making any changes to the withdrawal agreement negotiated with Theresa May, including the Northern Ireland backstop.

Mr Hunt said he was delighted to be in second place, promising to make the case that he can negotiate a better deal than Mr Johnson.

“We face a crucial choice: who can negotiate some better choices than the bad ones we face.The stakes have rarely been higher for our country. This serious moment calls for a serious leader.”