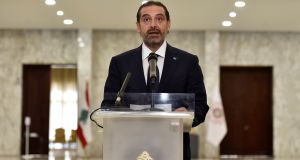 Saad Hariri: previously served as Lebanese prime minister from 2009-11 and from 2016-2020 but struggled to resolve the nation’s many problems. Photograph: Wael Hamzeh/EPA

Lebanon’s former prime minister Saad Hariri has been asked to form a salvation government to tackle the multiple crises his country faces.

President Michel Aoun named Mr Hariri prime minister after he secured the backing of 65 of the 120 current members of parliament – eight other deputies resigned in August, citing anger over the inability of the politicians to address the country’s existential problems.

Mr Hariri’s first task is to form a cabinet which will pass muster with Lebanon’s squabbling political factions, which were deeply divided over his appointment.

He received backing from his Sunni Future bloc, the Shia Amal, Druze leader Walid Jumblatt, smaller parties, and former premiers while the Shia Hizbullah movement pledged to facilitate the process of forming a cabinet.

Mr Hariri’s bid to return to office nearly a year after he had stepped down was contested by the two main Maronite Christian blocs, the Free Patriotic Movement founded by Mr Aoun and the hardline right-wing Lebanese Forces headed by ex-warlord Samir Geagea.

Having nominated himself for the job, Mr Hariri has taken on the Herculean tasks of tackling bankrupt banks, currency devaluation, rising poverty, heavy national indebtedness, rampant Covid-19 infection and popular protests demanding the removal of the entire political class.

Mr Hariri was forced to quit as prime minister last January when Lebanon’s economy began to collapse due to decades of mismanagement and corruption, triggering a countrywide uprising, dubbed the “October Revolution”, against the sectarian power sharing form of government imposed by colonial France before independence in 1943.

Under this regime, the president is always a Maronite Christian, the prime minister a Sunni and the parliamentary speaker a Shia. Other posts are allocated by religious affiliation, creating deeply entrenched clientelist and patronage networks that the revolutionaries have been unable to budge.

The protesters’ main demand, supported by French president Emmanuel Marcon, is a government of independent technocrats capable of addressing the country’s crises.

He provided Beirut with a roadmap for reforms that would enable Lebanon to access $21 billion in rescue funds from foreign donors and the International Monetary Fund. It has been reported that Mr Macron stepped back last week from involvement with Lebanon.

It is not clear whether Mr Hariri will be able to appoint independent ministers committed to the French plan or stem the country’s accelerating decline. A businessman with Lebanese, Saudi, and French citizenship, Mr Hariri (50) entered Lebanon’s Byzantine political scene after his father, billionaire ex-premier Rafik Hariri, was assassinated in 2005.

Saad Hariri served as prime minister from 2009-11 and from 2016-2020 but while in office did not resolve Lebanon’s chronic shortages of electricity and water, accumulating garbage and deteriorating infrastructure, or tackle corruption. Protesters against his return clashed in central Beirut on Wednesday night with supporters who torched the 11m tall clenched fist symbol of the revolt.