Poland to have almost total abortion ban after court ruling 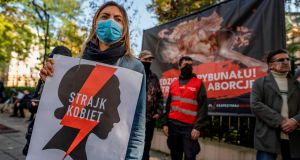 Poland’s constitutional tribunal ruled on Thursday that abortion due to foetal defects was unconstitutional, banning the most common of the few legal grounds for pregnancy termination in the predominantly Catholic country.

After the ruling goes into effect, abortion will be only be permissible in Poland in the case of rape, incest or a threat to the mother’s health and life, which make up only around 2 per cent of legal terminations conducted in recent years.

“The worst-case scenario that could have come true has come true. It is a devastating sentence that will destroy the lives of many women and many families,” said lawyer Kamila Ferenc who works with an NGO helping women denied abortion.

“Removing the basis for almost all legal abortions in Poland amounts to a ban and violates human rights. Today’s ruling of the constitutional court means underground/abroad abortions for those who can afford and even greater ordeal for all others.”

Conservative values have played a growing role in public life in Poland since the nationalist Law and Justice (PiS) came into power five years ago on a promise to defend what it sees as the nation’s traditional, Catholic character.

Curbing access to abortion has been a long-standing ambition of the party, but it has stepped back from previous legislative proposals amid widespread public backlash.

Critics say the constitutional tribunal may have acted on the party’s behalf. While the tribunal is nominally independent, most of its judges have been appointed by PiS. The party denies trying to influence the court.

Abortion rights activists say access to the procedure was often declined in recent years in Poland even in cases when it would be legal.

Many doctors in Poland, which already had some of the strictest abortion rules in Europe, exercise their legal right to refuse to terminate pregnancies on religious grounds. Some say they are pressured into doing so by their superiors.

Maria Kurowska, an MP with United Poland, a party in the ruling coalition with Law and Justice said: “We are glad with what the constitutional rribunal ruled because one can not kill a child for being sick. This is not a foetus, it is a child.” – Reuters