British prime minister Boris Johnson says some MPs hoping to block Brexit are engaged in “terrible collaboration" with the European Union during his first live question-and-answer session on Facebook. 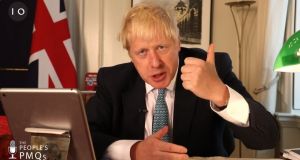 Boris Johnson has accused former chancellor Philip Hammond of undermining the government’s strategy with a “terrible collaboration” with the EU to thwart the UK’s departure from the bloc.

During the first “People’s PMQs” – a Facebook Q&A where the British prime minister answers questions from members of the public – Mr Johnson delivered a coded critique of MPs opposed to a no-deal Brexit, such as Mr Hammond, who have taken a public stand against his strategy.

“There’s a terrible collaboration, as it were, going on between people who think they can block Brexit in parliament and our European friends,” Mr Johnson said.

“Our European friends are not moving in their willingness to compromise. They’re not compromising at all on the withdrawal agreement even though it’s been thrown out three times, they’re sticking to every letter, every comma of the withdrawal agreement, including the [Northern Ireland] backstop, because they still think that Brexit can be blocked in parliament.”

The prime minister added that the efforts of these MPs to thwart his plan to negotiate a new Brexit agreement would make it “more likely it is we will be forced to leave with a no deal”.

Mr Johnson’s attack followed Mr Hammond’s first intervention since leaving the treasury, stating he was “very confident” parliament would be able to stop the UK leaving the EU without a deal on October 31st, describing such an outcome as “just as much a betrayal of the referendum result as not leaving at all”.

“There is no popular mandate for a no-deal Brexit and no parliamentary mandate for one either . . . most people in this country want to see us leave in a smooth and orderly fashion that will not disrupt lives, cost jobs or diminish living standards, whether they voted Leave or Remain in 2016,” Mr Hammond wrote in an article for The Times.

The former chancellor also criticised Dominic Cummings, the prime minister’s most influential adviser, when he hit out at the “unelected people” in Downing Street who “pull the strings” of the Johnson government. He questioned the prime minister’s tough negotiating stance and whether it would produce a new deal.

Mr Johnson has insisted that the Irish border backstop insurance policy to prevent a hard border between Northern Ireland and the Republic must be taken out of the withdrawal agreement as the basis for any further negotiations.

“The move from demanding changes to the backstop to demanding its total removal is a pivot from a tough negotiating stance to a wrecking one,” Mr Hammond wrote. “The unelected people who pull the strings of this government know that this is a demand the EU cannot, and will not, accede to.”

In response, a Downing Street official said that Mr Hammond and former business secretary Greg Clark had “sabotaged the UK’s preparations to leave” while serving in Theresa May’s government.

Since leaving the treasury ahead of Mr Johnson’s arrival in No 10, Mr Hammond has kept a low profile. But friends of the former chancellor say he is expected to play a major part in leading efforts to ensure parliament has a role in the direction of Brexit and to try and avoid no deal.

Mr Hammond also wrote that leaving without a deal would threaten the future of the UK by harming the peace in Northern Ireland and stoking the prospects for a further Scottish independence referendum.

“Far from being a powerful independent United Kingdom making its voice heard on the world stage, the reality would be a diminished and inward-looking little England, inexorably squeezed between the emerging economic power blocs,” he said.

Several prominent Conservatives, including Mr Hammond and Mr Clark, have written to Downing Street to express their concern that the “red lines” appear to “eliminate the chance of reaching agreement with the EU”.

Meanwhile Marcus Ball, a crowdfunded campaigner, has lost a bid to take his legal fight against Mr Johnson over the £350 million EU referendum bus claim to the supreme court. Mr Ball insisted “we are not giving” and may try to take his case directly to the supreme or European courts. – Copyright The Financial Times Limited 2019