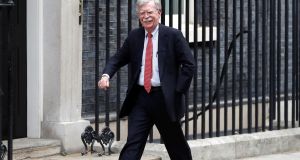 Irish officials in Washington have stepped-up efforts to highlight Ireland’s concerns about the impact of Brexit on the Belfast agreement, following signals from the Trump administration that it will sign a fast-track trade deal with Britain after Brexit.

US national security advisor John Bolton, who is a strong supporter of Brexit, said during a visit to Britain this week that the United States stands ready to sign a trade agreement with Britain, suggesting that a sector-by-sector agreement could be agreed.

It follows a letter signed by 45 Republican members of the US Senate to the new UK prime minister Boris Johnson pledging their support for a trade deal.

Invoking the words of Winston Churchill, the letter congratulates Mr Johnson on his appointment, pledging “unwavering support for the special relationship between our two countries as Britain leaves the European Union. ”

It also commits to advocating for a new bilateral trade agreement with Britain “as early as your Brexit terms would allow, that reflects the centuries of open commerce between our nations.”

The letter was initiated by Tom Cotton, the Arkansas senator who blocked the passage of a bill to allow Irish citizens to access the E3 visa last year, a working visa only currently available to Australian nationals.

Britain, despite the resignation recently of the UK ambassador to the United States, has traditionally had strong links to Republican members of Congress due to aligned security and defence interests.

Amid signs of increased contact between the White House and the new government in London, Irish officials have been meeting senior members of Congress on Capitol Hill in recent days, underlining Ireland’s position as Brexit enters a crucial phase.

But Mr Cotton’s letter - which was signed by most Republicans in the upper chamber, but by no Democrats - puts the Republican-controlled Senate at odds with House Speaker Nancy Pelosi and other senior Democrats who have warned that Congress will not back a trade deal if the Belfast Agreement is undermined.

Speaking to the Irish Times, Congressman Brendan Boyle said that the Ways and Means Committee in the House of Representatives will ultimately have to approve any trade agreement. “Guarding the Good Friday agreement is paramount. Any Brexit deal that jeopardises the peace process will simply not be acceptable when it comes to trade negotiations,” said the Pennsylvania congressman who is a member of the committee.

“Bolton is offering a political and economic mirage and he lacks any authority to dismiss Congressional opposition to a proposed free trade agreement,” he said. Pointing to research by the Peterson Institute for International Economics, he said that trade agreements of this kind typically take a year and a half to negotiate and three and a half years to actually implement.

During the first visit to Britain by a senior Trump administration official since the appointment of Boris Johnson as prime minister, Mr Bolton raised hopes this week that a trade agreement between the United States and Britain could be agreed swiftly, even if Britain leaves the European Union without a deal on October 31st. He suggested that both sides could “carve out some areas where it might be possible to reach a bilateral agreement very quickly, very straightforwardly.”

But trade experts have warned that such a deal will be difficult to achieve in reality.

While formal negotiations between Britain and the United States cannot start until Britain leaves the EU, a joint working group has been meeting informally in Washington to discuss negotiating priorities.

The United States has set out a number of objectives, including slashing tariff and non-tariff barriers on food and decreasing regulatory divergence - demands that many fear could allow chlorinated-washed chicken or other controversial food products into the UK and are likely to be rejected by British negotiators.

Asked about Mr Bolton’s assurances this week on the likelihood of a US-UK trade deal after Brexit, Tánaiste Simon Coveney said that key members of the US Congress had signalled their wish that Brexit should not undermine the principles of the Belfast Agreement including avoiding a return to a hard border on the island of Ireland.

“We’ve had some very strong language from some key politicians on Capitol Hill, saying clearly that unless the Good Friday Agreement is respected and protected through the Brexit process, they would find it very difficult to see how a trade deal could be concluded and approved,” he said on Tuesday.

“President Trump has made it clear he supports Brexit ... that is the US government’s position but there is a system in the US that involves both the White House and Congress and the Senate in the approval of trade deals so it’s not as straightforward as people have made out.”

1 Thirteen further deaths and 1,269 new cases of Covid-19 recorded in the Republic
2 Government planned to extend sweeping pandemic powers with 45-minute debate
3 Life under Level 5: What will the next six weeks look like for the State?
4 Level 5 enforcement: Fines for house parties and breaching 5km rule
5 Covid-19: State moves to Level 5 for six weeks with hopes of ‘meaningful’ Christmas celebrations
Real news has value SUBSCRIBE