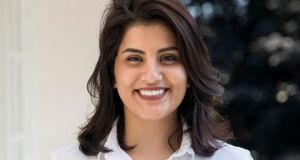 A prominent Saudi women’s rights activist has rejected an offer that would see her freed in return for agreeing to sign and record a statement saying she had not been tortured while in custody.

Instead, Loujain al-Hathloul (30) has reiterated her accusations of maltreatment, which she delivered earlier this year in open court.

She and three other women detained in May 2018 have accused the authorities of holding them in solitary confinement, sexual assault and administering beatings and electric shocks. Saudi officials have denied the allegations.

Walid al-Hathloul, her brother, said on Twitter that she had initially agreed to sign the statement denying torture and the family had vowed to keep it a secret. However, he said officials visited her in prison and told her the video “was part of the deal to release her”. When they “asked her to sign the document for the video release, she immediately ripped up the document”.

Hathloul was arrested along with a dozen other female activists and an unknown number of male supporters on allegations of “conspiring with hostile entities” by contacting and speaking to foreign journalists and human rights organisations. Detainees were also charged with cybercrime and communicating sensitive matters over the internet, which carries a sentence of up to five years in prison.

The women were detained shortly before the ultra-conservative kingdom lifted the world’s only ban on female driving. They have also campaigned for an end to the system of male guardianship, which treats women as minors from birth to death.

Women have had to gain permission from fathers, husbands, brothers or sons to marry, divorce, travel abroad, work, gain access to education and medical treatment, and obtain release from prison. Last month women were granted the right to travel abroad freely and work on the same basis as men. Therefore, it is bitterly ironic that Hathloul and other detainees remain in prison.

The timing of the offer is significant as it is customary in Muslim countries to pardon prisoners at the climax of the annual pilgrimage, Eid al-Adha (the Feast of Sacrifice), which was celebrated this week. Normally there is no quid pro quo.

Hundreds have been jailed since June of that year, when bin Salman ousted a cousin who was next in the line of succession.

The brutal killing of dissident Saudi journalist Jamal Khashoggi at the kingdom’s consulate in Istanbul in October 2018 intensified criticism of the Saudi regime following the arrest of activists. Among the critics were the UN Human Rights Council and three dozen countries, including all 28 EU members, but not the US.

Hathloul’s family allege that bin Salman’s confidant Saud al-Qahtani – who is believed to have masterminded Khashoggi’s killing – attended torture sessions and said he would rape and murder her.

Qahtani was formally fired but continues to serve bin Salman.