Arrivals into North from France and Netherlands must quarantine from Saturday 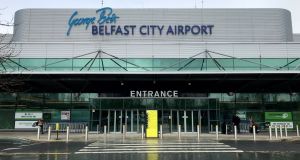 George Best Belfast City Airport. Monaco, Netherlands, Turks and Caicos, Aruba and Malta were also removed from the list of countries from which travellers coming into the UK are exempt from the need to self-isolate. File photograph: Liam McBurney/PA Wire

Travellers arriving from France and the Netherlands into Northern Ireland and the rest of the UK after 4am on Saturday will be required to quarantine for 14 days.

In a statement on Thursday night, the Northern Ireland Department of Health said: “The decision to introduce a quarantine period has been taken following medical and scientific advice.”

Monaco, Netherlands, Turks and Caicos, Aruba and Malta were also removed from the list of countries from which travellers are exempt from the need to self-isolate.

The North’s Minister for Health Robin Swann said: “The decision to remove these countries from the exempt list was not taken lightly. The countries have seen significant rises in new positive cases and my priority must be the safety of the people of Northern Ireland.

“This will undoubtedly cause upset and inconvenience, however I must put the people of Northern Ireland first and foremost. I will continue to monitor the situation in all countries and will move swiftly and without hesitation to make the changes to the regulations when necessary.

“As the situation around the world continues to change quickly, anyone considering a trip abroad should review the travel advice on NIDirect and FCO website before travelling. Countries on the exempt list one day could be removed the next and a quarantine period introduced. Ask yourself, is this travel necessary and is it worth it?”

The move brings the rules in Northern Ireland in relation to people returning from France and the Netherlands into line with those in the Republic.

The move came after British prime minister Boris Johnson said ministers would be “absolutely ruthless” in deciding on whether to impose the self-isolation requirement.

The decision to add France will cause dismay for thousands of British holidaymakers currently in the country.

The move will come as a bitter blow to the hard-pressed French tourism industry which relies heavily on visitors from the UK.

The UK foreign office updated its advice to warn against all but essential travel to the country because of the coronavirus risk.

Before the announcement was made, Mr Johnson said: “We have got to be absolutely ruthless about this, even with our closest and dearest friends and partners.

“I think everybody understands that.”

Mr Johnson said the Government could not allow the UK’s population to be “reinfected or the disease to come back in”.

“That is why the quarantine measures are very important and we have to apply them in a very strict way,” he said during a visit to Belfast where he met Micheál Martin for the first time since his appointment as Taoiseach.

With Spain already on the quarantine list, it now means that holidaymakers returning to the UK from the two most popular overseas destinations must now isolate for 14 days.

Shadow home secretary, Nick Thomas-Symonds, said: “While we support evidence based measures at the border, it’s vital that the government has a joined-up strategy, and recognises the impact of this on travel-related businesses. It is vital that a sector-specific deal is put in place urgently.

“That the government has still not put in place an effective track, trace and isolate system has made matters far worse and made it more likely that we are reliant on the blunt tool of 14-day quarantine.

“The government should publish all of the scientific evidence its decisions are based on and details of any work being done to reduce the time needed to isolate through increased testing and other measures.” – PA