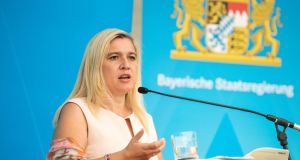 More than 900 Germans who tested positive for Covid-19 after a holiday abroad have yet to be informed of their infection – up to two weeks on.

On Thursday it emerged that of 85,000 people tested after crossing the border into Bavaria, more than half – 44,000 – have yet to be fully processed.

Some 60 per cent are from Bavaria and about 40 per cent live in the rest of Germany, according to state health authorities.

“We were trailblazers but mistakes happened, mistakes that are regrettable,” said Markus Söder, Bavarian premier and head of the ruling Christian Social Union (CSU). The testing setback is a major political embarrassment for the 53-year-old, who has worked hard to build his profile in the pandemic as a reliable crisis manager.

Mr Söder pointed out that Bavaria, which borders Austria and the Czech Republic, was the first federal state to introduce Covid-19 tests for returning holidaymakers. It introduced voluntary tests on July 25th, while obligatory tests were introduced at the start of August for all returnees from 130 countries on a “risk list”.

On Thursday Bavarian health minister Melanie Huml admitted the political rush to introduce testing – and an unexpectedly high uptake from travellers – had overloaded an improvised, manual system reliant on volunteers from the local Red Cross.

Ms Huml expressed thanks to volunteers for stepping in as a professional provider – and a digital test registration system – had not been available at short notice. She offered her resignation but this was refused by Mr Söder.

Health authorities have described the Bavarian case as a serious lapse given many of the 900-plus people with positive tests may not have been isolating. A private operator has taken over Bavarian border testing this week.

The news comes as the number of confirmed coronavirus cases across Germany rose again by 1,445 to 219,964 within 24 hours, the highest increase since early May.

Official health statistics show that the vast majority of new cases in the last month were contracted in Germany – 8,607 – followed by returnees from the Balkans, Poland and Spain.

The new spike in cases has prompted a fresh warning from federal health minister Jens Spahn to people to avoid large gatherings. “Last week we had an average age [among positive tests] of 34, the lowest average age since the start,” he told German breakfast television.

He said the country’s health system was coping, but that the virus could “quickly gain momentum”.

“We’re seeing that through holiday returnees, parties and family gatherings, and other causes that we have smaller and larger outbreaks in almost every part of the country.”

Despite concern about lapses in social distancing and other pandemic measures, a new survey shows Germans think consideration for others is on the rise. In February, a survey for the Bertelsmann Foundation suggested 41 per cent believed citizens did not care about others, down to only 19 per cent by early summer.