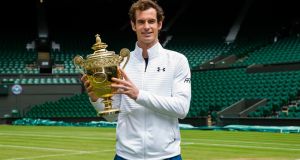 Tennis star Andy Murray has been awarded a Knighthood for services to tennis and charity in the UK New Year Honours list. Photo credit should read: Steve Paston/PA Wire

Actor Mark Rylance and tennis star Andy Murray have been awarded knighthoods, as talent from across the performing arts and sporting worlds were recognised in the UK New Year honours list.

It is the first honour for Rylance who played Thomas Cromwell in the BBC’s Wolf Hall and won an Oscar for his portrayal of Rudolph Abel in Bridge of Spies.

Speaking earlier this year, Rylance said he did not set much store by the various accolades he had collected over his career: “People say things about competing as actors and I know that is necessary to make a show out of it, but those actors are so good I feel I’m more of a spokesman when I win rather than better than the other nominees. I don’t take it too seriously.”

Murray’s honour caps a remarkable year for the Scot, who claimed a second Wimbledon title, defended his Olympic crown and took the world number one slot from Novak Djokovic in an extraordinary run of form. Aged 29, he is among the youngest to be awarded a knighthood in modern times and had once said he felt too young for such an accolade.

Kinks frontman Ray Davies (72) said he felt a mixture of joy and embarrassment on being awarded a knighthood for services to the arts. Despite The Kinks parting ways in 1996, Davies forged a solo career and two years ago collaborated on Sunny Afternoon, the Olivier-award wining musical based on his music and lyrics.

“This is for the people who supported my music over the years,” said Davies. “I’m kind of reluctant to collect rewards. I usually back out of ceremonies. I’m kind of a shy person.”

Four-time Olympic gold distance runner Mo Farah (33), said of his knighthood: “I am so happy to be awarded this incredible honour from the country that has been my home since I moved here at the age of eight. Looking back at the boy who arrived here from Somalia, not speaking any English, I could never have imagined where I would be today – it is a dream come true.”

Sir Roger Bannister (87), the first man to run a mile in under four minutes, is made a companion of honour – the highest award. So, too, is percussionist Dame Evelyn Glennie, and political veteran Baroness Shirley Williams.

Among the 1,197 people honoured, Anna Wintour (67), editor-in-chief of US Vogue becomes a dame in the diplomatic and overseas list for services to fashion and journalism. Designer and former pop singer Victoria Beckham (42), receives an OBE for services to the fashion industry, matching the honour given to her husband, David, 13 years ago.

The honours list is put together by nine independent committees set up by the UK cabinet office, and this year there are equal numbers of male and female recipients. A small number of honours are in the Queen’s personal gift.