Russian president had gambled on Trump relationship with show of magnanimity 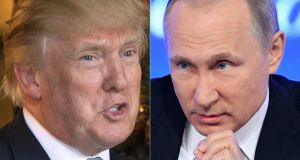 US president-elect Donald Trump was gushing in his praise for Russian president Vladimir Putin yesterday evening after Mr Putin ruled out tit-for-tat measures against the United States for imposing sanctions on Russia, as the Kremlin gambles on better ties with Washington in the new US administration.

Officials in Moscow yesterday urged Mr Putin to retaliate against the US for levelling sanctions against the Russian intelligence services amid an escalating row over computer hacking. However, as 35 Russian diplomats in Washington and San Francisco scrambled to pack their bags after being ordered by the Obama administration to leave the country before the new year, Mr Putin took a surprise decision to avoid official reprisals.

“We will not create problems for American diplomats. We will not expel anyone,” the Russian leader said in a statement posted on the Kremlin website.

In a characteristic act of Twitter diplomacy yesterday, Mr Trump praised the Russian president’s approach: “Great move on delay (by V. Putin) – I always knew he was very smart!”, he wrote. Almost as if to emphasise the unprecedented and provocative nature of a US president-elect backing Russia ahead of his own government, Mr Trump pinned the tweet to his timeline.

The sanctions announced by Barack Obama’s administration on Thursday came amid US allegations that Kremlin-backed computer hackers disrupted the US presidential election. Russia has denied that it ordered cyber attacks on the Democratic Party’s computer networks and leaked damaging information in an attempt to help the Republican Party candidate, Mr Trump, take the White House.

Mr Trump, a professed admirer of Mr Putin, pledged during the election campaign to build better relations between the US and Russia that have fallen to a dismal low during Mr Obama’s final term. Although that goal is threatened by the hacking allegations, Mr Putin’s decision not to retaliate for Thursday’s sanctions may give Mr Trump more room to manoeuvre.

Mr Putin yesterday heavily criticised the outgoing Obama administration for “new unfriendly steps” that he described as a “provocation” designed to further undermine Russian-American ties. The Kremlin would “not sink to the level of irresponsible diplomacy” but would wait until Mr Trump was sworn in as president next month before beginning work to restore Russian-US relations, he said.

Great move on delay (by V. Putin) - I always knew he was very smart!

Republican politicians in the US have been calling for even tougher sanctions against Russia, but so far Mr Trump has brushed aside the hacking allegations that could raise questions about his narrow win in the presidential race last month. It was time for “the country to move on to bigger and better things”, he told reporters on Thursday, adding that he would meet American intelligence chiefs next week for an update on the case.

Should Trump seek to heal the rift with Russia, he might encounter opposition in Congress, including from fellow Republicans.

Republican John McCain, chairman of the Senate Armed Services Committee, said on Friday that Russia must face a penalty for the cyber attacks.

“When you attack a country, it’s an act of war,”

McCain said in an interview with the Ukrainian TV channel “1+1” while on a visit to Kiev.

“And so we have to make sure that there is a price to pay, so that we can perhaps persuade the Russians to stop these kind of attacks on our very fundamentals of democracy,” added McCain, who has scheduled a hearing for Thursday on foreign cyber threats.

Sergei Lavrov, the Russian minister of foreign affairs, called for immediate tit-for-tat measures against the US. “We cannot leave such tricks without a response. Reciprocity is the law of diplomacy and international relations,” he said. Dmitry Medvedev, the Russian prime minister, tweeted that the Obama government was ending its final term in “anti-Russian agony”.

Maria Zakharova, press spokeswoman for the Russian foreign ministry, criticised Mr Obama’s administration as a “group of losers, angry and shortsighted”. In comments posted on social networks, she said “America and the American people had been humiliated by their own president”.

Amid the chorus of official criticism, Mr Putin appeared magnanimous as he invited the children of US diplomats in Moscow to the Kremlin to attend new year celebrations. He also wished Mr Obama, Mr Trump and the American people a happy new year.

“Putin’s asymmetric response to Obama’s new sanctions is an investment in the incoming Trump presidency,” tweeted Dmitri Trenin, the director of the Carnegie Moscow Centre.

This is a “different kind of tit for tat . . . Even as Obama seeks to constrain Trump in his Russian policy, Putin counters that step with a show of magnanimity”.