Greek ambassador’s wife and policeman held over his death 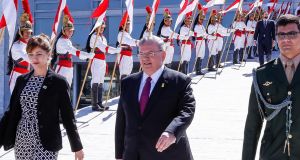 An undated handout picture showing Greek ambassador to Brazil, Kyriakos Amiridis (centre), who is believed to have been murdered. Photograph: AFP

A Rio de Janeiro police officer confessed to murdering Greece’s ambassador to Brazil, possibly at the direction of the diplomat’s Brazilian wife with whom the policeman was romantically involved, Globo TV reported on Friday, citing police sources.

Greek ambassador Kyriakos Amiridis (59) was missing since Monday night. Francoise, his Brazilian wife and the mother of their 10-year-old daughter, reported him missing to police on Wednesday.

Globo TV reported on Friday afternoon that officer Sergio Moreira (29) confessed to killing the ambassador on Monday night in the Rio de Janeiro home the Amiridis owned in Nova Iguacu, a hardscrabble neighbourhood in Rio’s sprawling and violent northern outskirts.

Globo TV reported that investigators said they believed Francoise and Moreira had arranged the murder in advance. Both Amiridis’s wife and the officer were in custody, but it was not clear if they had retained lawyers.

Amiridis served as Greece’s consul general in Rio from 2001 to 2004. He was Greece’s ambassador to Libya from 2012 until he took the top Brazil post at the beginning of 2016. Globo reported that two other suspects were in custody, but they were not identified. The O Globo newspaper earlier reported that blood was found on a couch inside the home.

A burned corpse was found on Thursday evening inside the car that Amiridis and his wife had rented. It was parked under a highway overpass in the area where the couple had been staying.

On Thursday, police confirmed that the ambassador had been missing since Monday night, when he was last seen leaving the Rio home he shared with his wife.

The incident is another blow to Rio’s image, just four months after it hosted the summer Olympics. The neighbourhood where the car was found is dominated by powerful and politically connected armed groups comprised mostly of off-duty or retired police and firefighters who control vast areas.

They often extort residents in exchange for keeping drug gangs from taking over the areas. The armed groups have grown for several years and often curry favour with local politicians by promising to deliver votes from entire neighbourhoods as long as authorities allow them to carry out their crimes.

Crime in Rio has been rising and the state is deeply indebted, often unable to pay police and other salaries on time, if at all.