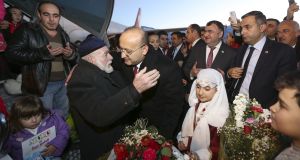 On the western shores of the glass-like Lake Van in eastern Turkey, a community chased by war and violence for more than 70 years is once again starting anew.

The families are part of an ethnic Turkic group driven, over decades, from the rural highlands on Georgia’s Turkish border to the Faranga valley in Uzbekistan, and later to Ukraine.

Efratun Tifur is hoping this will be his final home – several hundred kilometres from where his mother, grandmother and more than 100,000 others were forced into cattle wagons and taken deep into central Asia by train in 1944 as part of Stalin’s paranoia-driven population transfer.

In his 78 years, he has survived war and persecution in three countries and across thousands of kilometres.

“The journey was really horrible. I was only four or five years old and I don’t remember much but it was cold, and there were bodies being thrown from the train all the time,” he says.

In Uzbekistan, the Meskhetians kept up their ties to the land – the only source of a livelihood they knew – but at the fringes of Uzbek society.

Tifur worked as a tractor driver, then a barber before going back to farming until he lost an eye in an accident.

“We weren’t allowed a full education in Uzbekistan,” he says. “We were segregated, oppressed.”

Decades later as the Soviet Union crumbled and its outer republics grappled with the reality of independence, the Meskhetian community again found their lives at risk.

June 1989 saw the group viciously attacked in pogroms that continued for two weeks. More than 100 people were killed and 1,000 injured.

The community immediately called time on Uzbekistan with many fleeing to Russia and Ukraine.

In Ukraine, life was good, despite being Muslims in a Christian country that was also struggling to deal with the fallout of the collapse of communism.

“The government in Ukraine gave us some rights, to farm and own land,” Tifur says.

There, he grew mostly potatoes and tomatoes on seven hectares of his own land outside the city of Poltava in eastern Ukraine.

Life meandered on and a new generation were raised on farming, with little care or need for a college education. But once more, disaster struck.

When anti-government protesters staged a sit-in in Kiev’s Maidan square in November 2013, little did the Meskhetian community farming on the periphery of towns and cities far away in the country’s east know they would again be uprooted.

“Some of the younger Ahiskan Turk men had to go to the front line to fight. So, the choices were to stay and fight the Russians, or go to Russia and fight Ukraine,” says Tifur.

Other Meskhetians now in Turkey who lived further east and closer to the intense clashes saw their local market shelled. Many fled to Russia, where a community had sprung up after 1989.

An unexpected stroke of good fortune occurred in March 2015. Turkey’s president Recep Tayyip Erdogan, a man criticised for eliminating domestic opponents but lauded for supporting Muslims around the world, was in Kiev to meet the country’s president and discuss a potential loan and the protection of Tartar Turks in Russian-occupied Crimea.

It was then the president was introduced to representatives of the Meskhetian Turk community, heard of their plight and pledged to help.

About 700 of the 3,000 people expected to relocate to Turkey on the direct orders of Turkey’s president have already arrived in the eastern provinces of Bitlis and Erzincan.

The first group was flown in last December and have been provided with newly-built homes.

Tifur moved to Ahlat five months ago with his wife, son and daughter-in-law and their three girls, aged 10, 8 and 5, who all make regular use of a new playground.

Halima Tifur says her grandchildren are attending a local Turkish school and have had no difficulties adapting.

As Turkish speakers, though with a different accent, they have an enormous advantage over the country’s millions of Syrian and Afghan refugees.

From the sitting room of her large apartment overlooking Lake Van and a new mosque built especially for the community, she lists a stream of items distributed by the government for the children.

“Books, school bags, pens, uniforms, everything they need for school,” she says. “In Ukraine it was okay for them, but they are very happy here.”

“Thanks to Tayyip Erdogan and the Turkish government we have come home. I’m finally happy; this is my homeland.”

Being Muslims, identifying for centuries as ethnic Turks, as well as speaking Turkish has made Turkey linger large in Meskhetian consciousness, a sentiment that’s been accentuated by the rise over the last decade of Erdogan, an Islamist.

Yet Turkey’s newest residents and their families can’t help but find themselves once more caught up in the current of the country’s ongoing and multifaceted political instability. A son and two of Tifur’s daughters are still stuck in Ukraine.

“They badly want to come here but there are some issues now since what happened last summer,” he says, referring to the purge following a failed military coup in July.

“It’s become more difficult now because of the political situation.”

Not only is the upheaval wrought by the failed coup threatening to now divide families, the Kurdish conflict has steered uneasily close in recent months.

Bitlis is a Kurdish-majority province and a roadside bombing in August killed five soldiers and a village guard in the mountains a 90-minute drive south of Ahlat.

Police and municipality buildings in the town are protected by metal barriers and high concrete walls.

But it’s not politics dominating conversations between Efratun Tifur and his neighbours as they drink tea and play backgammon on a recent Saturday morning.

“We need to be farming – we need some land,” Tifur says. The authorities, he says, have promised land for those who want to work and jobs for those with university degrees.

“All we know is farming.”