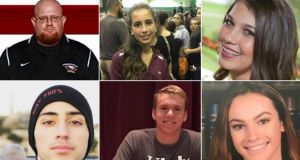 The 17 people killed in Wednesday’s high school shooting have now been identified by sheriff’s officials. Three additional victims remain in critical condition. Here are those who lost their lives in the massacre at Marjory Stoneman Douglas high school.

A student at Stoneman Douglas, Ms Guttenberg was confirmed killed after her parents appealed on social media for help finding her. They were unable to reach her. Hours later, her father posted that they “lost our baby girl to a violent shooting at her school”.

He pleaded for privacy, writing: “I am broken as I write this trying to figure out how my family gets through this.”

Ms Guttenberg’s cousin, Laurie Singer Matthias, wrote on Facebook: “I am beyond grief stricken. I am beyond heartbroken. I am pissed as hell.”

“My beautiful cousin’s young life was taken today by a f**king lunatic with a semiautomatic,” she wrote. “Why??? Why???”

“This beautiful young lady simply went to school today. And now her parents and our family are grieving, my precious cousins lives all our lives have been changed forever.”

An assistant football coach and part-time security guard, Mr Feis was named as a victim by the high school football team’s Twitter account.

“He selflessly shielded students from the shooter when he was shot. He died a hero and he will forever be in our hearts and memories,” the post read.

Broward county sheriff Scott Israel also remembered Mr Feis, telling reporters: “The kids in this community loved him, they adored him, he was one of the greatest people I knew.”

“When Aaron Feis died, when he was killed, tragically, inhumanly, he died protecting others because that’s who he was.”

Football coach Willis May told the Florida Sun Sentinel that Mr Feis was shot while helping a student. Mr May said he heard from a student that Mr Feis jumped to help her and pushed her through a door, placing himself in the line of fire between the student and the gunman.

Students told the Daily Beast that Mr Feis often acted as a mentor around the school, and Mr May called him a “big ol’ teddy bear”.

Mr Feis also served at the school as a school security guard. He was among those who first responded to the popping sounds in the halls, which some mistook for firecrackers.

Former co-workers remembered Mr Feis on Facebook, with one writing that the security staff had run into the man charged with the attack, Nikolas Cruz, before. “I’ve worked with Coach Feis for about 11 years we all became very close as a security staff,” Yvonne Grant wrote. “We all had encountered Nikolas at some time escorting him out of class room for his behaviour etc. I knew both of them very well.”

A 14-year-old freshman, Martin Duque’s older brother Miguel wrote on Instagram that he had died overnight. “Words can not describe my pain,” he wrote. “I love brother Martin you’ll be missed buddy. I know you’re in a better place.”

Mr Dworet was a senior who had just received a swimming scholarship to the University of Indianapolis. One friend wrote a tribute on Instagram, saying: “We had a class together earlier in the day. ‘See you tomorrow,’ you said as you walked out. But I won’t see you tomorrow, or next week, or next month.

“We walked into kindergarten together, so knowing that you won’t be walking across the stage at graduation with me in a few months is devastating and heartbreaking.”

The president of the University of Indianapolis, said in a statement: “Nick’s death is a reminder that we are connected to the larger world, and when tragedy hits in places around the world, it oftentimes affects us at home.”

The 15-year-old’s aunt, Joan Cox, said: “This has devastated our family and we’re all in shock and disbelief,” his uncle, Toni Brownlee, wrote on Facebook. “Our hearts are broken. Luke was a beautiful human being and greatly loved.”

The school’s 49-year-old athletic director and a wrestling coach, Mr Hixon was an Iraq war veteran “who would give you the shirt off his back,” said Dan Jacob, the athletics director of a neighbouring school, in an interview with the Sun Sentinel.

“Chris is probably the nicest guy I have ever met. He does so much,” said Mr Jacob. “I am totally crushed.”

Allen Held, a wrestling coach at another nearby high school, said: “If you needed something he was the first one there. To me, he was a great friend and a brother in life.”

The sheriff praised Mr Hixon and Mr Feis as heroes, saying: “Those two heroes gave their lives for our kids and probably helped prevent this from being a worse tragedy than it is today.”

The death of Meadow Pollack (18) was confirmed on Thursday morning by her father, Andrew, who spoke with the Palm Beach Post. Her friend, Gil Lovito, pleaded on Facebook for people to “please say a prayer for the family of an amazing girl I got to call my best friend growing up”.

A 17-year-old who became a US citizen last year, according to the Miami Herald, Mr Oliver was known as “Guac,” short for “guacamole,” because many couldn’t pronounce his first name. “My friend will literally never get to say, ‘I graduated high school,’” said Tyra Hemans, a 19-year-old who said she has been friends with Mr Oliver since they were freshmen.

A 14-year-old freshman who participated on the school’s winter guard team, a seasonal variant of the colour guard team. That team’s choreographer, Andy Mroczek, posted on Facebook: “We lost a beautiful soul tonight.”

Ms Petty was a 14-year-old freshman at the high school, whose family and friends reported her among the victims, on social media. “There are no hashtags for moments like this, only sadness,” Ms Petty’s great aunt, Claudette McMahon Joshi, wrote on Facebook. “Our hearts are with them and all the families touched by this tragedy.”

One of Cara Loughran’s neighbours mourned her on Facebook. “It is with a heavy heart and much regret that I write these words. Our next-door neighbour’s daughter was one of the lives taken to soon by a senseless act of violence at Stoneman Douglas High School. RIP Cara, and fly with the angels. You will be greatly missed, and we will always love you and celebrate your beautiful life.”

The school’s geography teacher and cross-country coach, 35-year-old Beigel reportedly unlocked his classroom during the shootings so that students could hide. He was shot and killed as he tried to lock the door.

Stoneman Douglas student Kelsey Friend told CNN that Mr Beigel saved her life. “He was my hero and he will forever be my hero. I’ll never forget the actions he took for me,” she said.

A soccer player at the high school, her team remembered her in a Facebook post as a “loved and well respected member of our club and community.”

“To Alyssa’s friends,” the post said, “honor Alyssa by doing something fabulous in your life. Don’t ever give up and inspire for greatness. Live for Alyssa! Be her voice and breathe for her. Alyssa loved you all forever!”

Lori Alhadeff, Alyssa’s mother, told HLN-CNN she dropped her daughter off at school and said “I love you.” Alyssa, she added, “was a beautiful, smart, talented, successful, awesome, amazing soccer player. You’ll be greatly missed, Alyssa. We love you so much. You’ll always, always be in our hearts.”

His former march band instructor Gil Gredinger later posted a message on Twitter: “This is 14-year-old Alex Schachter. I went to high school with his father. He died yesterday. My heart breaks for his family. I have no words.”

Aaron Chen told the Miami Herald that his 15-year-old cousin was last seen wearing his gray Reserve Officers Training Corps uniform, and holding a door open for other students to escape. “He wasn’t supposed to die,” Mr Chen said. “He was supposed to grow old with me.”

The 16-year-old was one of 10 students at Marjory Stoneman Douglas to qualify as semi-finalist for a National Merit Scholar award. A friend wrote on Facebook: “I was in the same classroom as this beautiful soul, she was so bright and had her entire life ahead of her. She was someone we all praised for her intelligence.”

A family member wrote on Facebook on Thursday that Helena was “a smart, kind hearted, and thoughtful person. She was deeply loved and loved others even more so. Though she was some what reserved, she had a relentless motivation towards her academic studies, and her soft warm demeanour brought the best out in all who knew her.” –Guardian